Renault duo look ahead to Germany 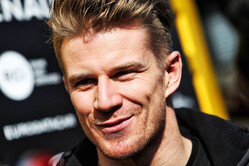 It's home Grand Prix time for Nico Hulkenberg at Hockenheim and he explains why it's so special racing in front of the German fans and his targets for the race weekend.

What's it like racing at home?
Nico Hulkenberg: It's very special racing in your home country. It's always motivating to do well in front of your home fans as you know they are cheering for you and wanting you to have a strong result. We had a really good race in Germany last year, so we'll be targeting the same again this season, not only for the fans, but also for the team as well.

Is Hockenheim a circuit you like?
NH: It's a really fun circuit to drive, especially in a modern Formula 1 car with all the downforce. Some of the corners are very quick nowadays especially Turn 1. Turn 2 is very important as you need a high minimum speed to open up some momentum for the on-going curve to the hairpin. That's the best overtaking spot during the race. You need good traction out of the hairpin for the middle part of sector two. The final sector is quite cool with grandstands on all sides and the atmosphere is always loud there. It's the most technical part of the lap as it's quite narrow and a great vantage spot for fans.

How do you look back at Great Britain?
NH: It was a decent team result with both Daniel and I in the points. However, we always strive for better and for more and maybe we left something on the table. It was a difficult race on my side with a number of things going on, so to still finish tenth was strong. We found some improvements there, which we need to build on heading into this back-to-back fortnight with Germany and Hungary.

Daniel Ricciardo secured strong points in Silverstone as he looks ahead to Hockenheim with another solid outing on his mind.

What's there to say about the German Grand Prix?
Daniel Ricciardo: Hockenheim is a fun circuit and I've always loved racing there throughout my career. Turn 1 is super-fast and there are some cool corner combinations to dig into especially in sector three in the stadium. There are some good overtaking spots too especially at the hairpin after the burst of full throttle. It's a cool track and one I've always seemed to go well at. The German crowd is always electric too, they are very loud and passionate for motorsport. I also like schnitzels, so we have some of them to look forward to!

How pleased were you to pick up points last time out?
DR: Firstly, it was very good for the team to make a strong recovery after a couple of rounds which fell below our expectations. We knew we could have had slightly more but we were unlucky with the timing of the Safety Car. Overall it was an encouraging result but we want to build some momentum for Germany and then again for Hungary before we break for the summer. It's an important time as we know how closely fought the midfield is and we have to score regularly not only to keep tabs with our rivals but also to do better than them.

What did you do on the weekend off?
DR: It was our first weekend off for a little while as we had France, Austria, Goodwood and Silverstone all across the last four weeks. We did a bit of training, kept it quiet and routine with all our focus on this next race. We have a few things to assess for Germany but the team is working really hard to prepare and put ourselves in the best possible position.