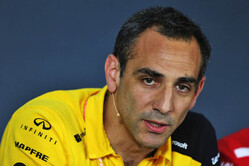 Cyril Abiteboul, Team Principal: We can be reasonably satisfied to have put both cars into the points in Silverstone after yet another difficult Austrian Grand Prix, an event that has not suited us year on year. We showed some good form throughout the weekend in Britain, with Daniel and Nico in Q3 and ultimately an unpredictable race in which we could have and should have scored even more points.

On the whole, we showed our potential at a track which has, under recent regulations, become a real temple for engine power. However, we recognise there are still areas where we need to improve and we are concentrating on these weaker points. Hockenheim and the Hungaroring should suit our package better although the extreme temperatures we expect to encounter may present challenges for the engine or tyres - a little like in Austria - however we will do our best to achieve the best results possible.

After a frenetic Silverstone Sunday where both cars finished in the points, focus turns to Hockenheim for the German Grand Prix as Chassis Technical Director Nick Chester explains what we can expect at the legendary raceway.

What are the main challenges of Hockenheim?
Nick Chester: Hockenheim has quite a mix of corners. Turn 1 is very fast and then there's a bit of slow speed especially at Turns 2, 6 and a chicane round the back of the circuit. There are also some straights so you also have the drag-downforce balance to bear in mind. Overall, you need a car to work right across the speed range there.

It's often really hot at this time of year in central Europe as we experienced in France and Austria. If you have balance problems, heat makes it worse as you lose grip, see an increase in sliding and then it's a vicious cycle. The tyre range is the same as Paul Ricard and Austria. We'll be aiming to get the car well balanced and, given how we went in Silverstone, we'll be targeting a similar outing.

How did the team regain its competitiveness in Great Britain?
NC: We had a pretty good balance on the car in Silverstone. The drivers were happy, and we could run a fairly light wing level. The car was good in low-speed, which we know it often is. Hockenheim does have a number of lower speed corners. Silverstone has a bit of medium to high-speed and we found our usual problems there, which we're working on to find improvements. We had good race pace and our race balance was strong in Silverstone.