Mercedes aiming to decide on Bottas next month 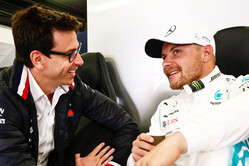 Speaking to reporters in Hockenheim, Mercedes boss, Toto Wolff said that he aims to decide his team's 2020 line-up over the summer break.

The seat alongside Lewis Hamilton in the team that has utterly dominated the hybrid era since its introduction, is without doubt one of the most hotly contested.

While Valtteri Bottas has been stronger this season, Wolff is aware that he also has Esteban Ocon and George Russell in the wings.

Asked if Bottas will be retained for next year, the Austrian was giving little away.

"We want to end the season before the shutdown in a good place and put in two solid performances in Hockenheim and Budapest," he said, "and then spend some time thinking about driver line-up for 2020 and beyond.

"From my point of view, the performances in qualifying are really strong," he said of the Finn. "Having an almost balanced record against Lewis is something to be proud of and shows that he has made a step-up from last year.

"Racing, again, is a different exercise," he continued. "I think this year's theme is all about keeping the car and the tyres in the sweet spot. That means you maybe need to drive the car in a different way.

"He's getting there. He's getting better and better. We have seen a race in Silverstone where, if the Safety Car had come out in a different way, he would have challenged for the race win. But the ifs don't count. You need to bring it to the end - but I'm sure we will see Valtteri continue to improve and bring in good race performances."

Minded that last year, Mercedes had confirmed its line up by now (July 20), he said: "I guess it's pretty unusual to announce drivers in July anyway. If you want to take all the time you properly need to assess you can even drag it into the winter, like we have seen in some other teams and which was the standard in the past.

"For us it's not only about making the right decision for next year, it's about looking ahead. And this is why we agreed that we will take the decision in August going forwards. But that doesn't necessarily mean we will announce it in August."

Asked about Ocon, Wolff said: "We're very happy with the development of Esteban and equally George. They are our most senior junior drivers and the aim is to make them ready for a seat in a Mercedes.

"It was an unfortunate situation last year that Esteban fell between the chairs. He could have chosen between two seats and in the end nothing came out so from our perspective everybody knows about his driving capabilities.

"For Mercedes, Valtteri is showing some very strong performances and merits the seat but equally Esteban has shown that in the past and is a great addition to the team.

"He contributes a lot behind closed doors. He drives the sim overnight on race weekends, comes in here on Saturday and gives us input and he's a great kid overall.

"Putting a Mercedes young driver in the car would be interesting as well. Having said that, there is interest for Esteban among other teams and we need to carefully make a decision for ourselves and with the other interested parties, not only for our own benefit but also for Esteban's benefit. And if it would mean that we are taking a decision in favour of Valtteri, it clearly also means that somebody else would continue to develop him and would mean that we would lose our hand for a year or two or more on Esteban and these are the consequences of that decision."