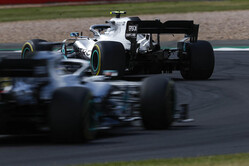 The history books will record that Sunday's British Grand Prix witnessed another 1-2 for Mercedes, the German outfit's seventh of the season.

But that doesn't scratch the surface of a race that saw action from lights to flag, battles throughout the field and a number of heart-in-mouth moments.

In the wake of a number of races clouded by controversial decisions by the stewards, Sunday's race witnessed just two deliberations, the alleged unsafe release of Lando Norris and Sebastian Vettel's lunge at Max Verstappen.

Following on from an entertaining race in Austria, Toto Wolff believes that the elbows-out, hard racing witnessed on Sunday is just what the sport needs.

"You can clearly see that the Leclerc/Verstappen incident in Austria is being interpreted exactly in the way it was in Austria, and hard racing is permitted," said the Mercedes boss. "You can push somebody out while exiting the corner.

"I think this is how it is allowed in most of the other formulas," he continued, "and it needs to be between teams. I think that's what we all want to see. It is hard racing, but it's something we need to do."

That said, the opening few laps were clearly nerve wracking for the Mercedes boss as his two drivers went head-to-head, though he insists he was confident there would be no silliness.

"This is exactly what we debated," he says. "I don't want to see any of this in an intra-team battle and I think I have no doubt they know how to race each other.

"But I thought it was very good racing between the two of them, certainly very entertaining, nobody could say that there wasn't hard defending but it wasn't dirty. What I think what we've seen between some of the other drivers is borderline dirty," he admits.

"There is always dirtiness we want to see out there in racing and it is good when it is drivers going against each other but not in the same team."