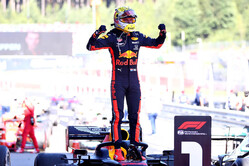 With Max Verstappen's win hanging in the balance, the sport was left on tenterhooks for over three hours as the Spielberg stewards deliberated over the controversial incident on lap 69 which saw the Dutchman pass Charles Leclerc to take victory in the Austrian GP.

In that time, the FIA website crashed under the pressure, and a fake document was doing the rounds on social media claiming that Verstappen had been handed a time penalty and that therefore Leclerc was the winner.

At around 19:50 (local time), the decision finally came, it was a "racing incident" and the result stood.

Coming in the wake of controversial decisions which impacted both the Canadian and French races, Race director, Michael Masi was asked why the decision had taken so long.

"The primary part was we didn't get going until 6pm, because of the various media commitments, the (TV) pen and the post-race press conference," he said, according to Motorsport.com.

"The hearing itself, give or take, was about an hour with all parties involved," he revealed. "The stewards deliberated, looked at other cases, precedents, and spoke between themselves.

"By the time you write the decision and then make sure there are no typos or anything in it and so forth, and then summon the teams back, delivering the decision to them, it quickly adds up.

That said, the fact is that, not for the first time, the sport was effectively in limbo, and for several hours after the race it was unclear who had actually won.

"You want the right decision made," he said, "considering all the circumstances and all the factors that are around, and using as much as information as you have available.

"It's one of those nuances in this sport," he continued. "We can't blow a whistle and freeze everything, make a decision, and play on. We try wherever possible to have the podium be the podium, but when it's the last two or three laps of the race, it does make it quite difficult.

"If it was something that happened on lap three I would have thought that if the stewards felt they had everything, they would have made a decision and it would have been 'play on'."