A penalty for Max would have been incomprehensible, says Horner 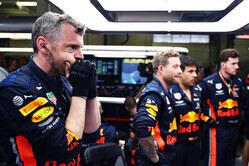 After three long, agonising hours, the celebrations could begin in earnest, as the stewards finally declared Max Verstappen's pass on Charles Leclerc to have been a "racing incident" that required no further action.

While fans remain divided, the fact is that had the first driver to take the chequered flag in a race been demoted to second for the second time in almost as many weeks, severe damage could have been done to a sport already reeling from fan and media criticism.

Speaking after the stewards decision was announced, team boss, Christian Horner insisted he was never in any doubt, as penalising Verstappen following what was a brilliant performance, considering a fluffed start saw him drop to seventh by the end of the first lap, was "incomprehensible"

"We were completely convinced that it was ok," he told Sky Sports. "But then of course it goes to the stewards and at that point you don't know, but I think the stewards who are up today have made absolutely the right choice. One day it will go against us but I think it was fair racing, it was hard racing. It's what Formula 1 should be.

"Max out-braked him and if you look at it he's ahead at the apex," he continued "At that point he's won the corner, it's for the other guy to back out of it and try the undercut.

"At that point, it's slam dunk," he insisted, "it's checkmate, he's got the corner. And that's obviously how the stewards saw it. I think we're over regulated anyway but they've made the right decision and we're very happy about that.

"It's incomprehensible to think that they would have changed the podium after a race like that. That was just the tonic that Formula 1 needed. A fantastic race."