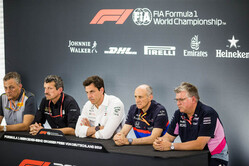 Q: Toto, you're celebrating Mercedes' 200th race this weekend, 125 years in motorsport. What do those stats mean to you, the boss, and do you have a favourite moment you can tell us about?
Toto Wolff: The stats are not so interesting to me because it's just numbers and it's the past. But what it reminds you when you see all the photography and films that have been done of the old days is that the responsibility that we carry for the brand. Mercedes started in motorsport 125 years ago, lots of history has been created and that is a responsibility which we are carrying and representing that fantastic, almighty brand.

Q: You say there's a responsibility, that brings pressure. What would it mean to win this race, given that you also have the title sponsorship of it.
TW: Well, from a calmer perspective, everything speaks against it. We are celebrating 125 years of motorsport; we are having a dedicated livery, we are wearing a different team kit tomorrow, and lots of activities around the track, all board members - or most of the board members present, so when you look at it from the point of car marque, this is one to lose for us. But the reality is different. It's another race, we want to do particularly well here in Hockenheim because of our home crowd - but on the other side it's 25 points; as many points as any other given circuit and we just need to add another good race performance in order to make a step towards the Championship.

Q: And talking of good race performance, can I ask you about Valtteri Bottas now. He has four poles this year, so he seems to have made progress in qualifying - yet it doesn't always translate to Sunday afternoons as well. Why do you think that is?
TW: From my point of view, the performances in qualifying are really strong. Having an almost balanced record against Lewis Hamilton is something to be proud of and shows that he has made a step-up from last year. Racing, again, is a different exercise. I think this year's theme is all about keeping the car and the tyres in the sweet spot. That means you maybe need to drive the car in a different way. He's getting there. He's getting better and better. We have seen a race in Silverstone where, if the Safety Car had come out in a different way, he would have challenged for the race win. But the ifs don't count. You need to bring it to the end - but I'm sure we will see Valtteri continue to improve and bring in good race performances.

Q: ...and continue with Mercedes in 2020?
TW: I knew you were going to ask that question! We want to end the season before the shutdown in a good place and put in two solid performances in Hockenheim and Budapest and then spend some time thinking about driver line-up for 2020 and beyond.

Q: Otmar, an important race for Racing Point this weekend with lots of upgrades coming to the car. After FP1, what are your first impressions of the performance.
Otmar Szafnauer: Well, first impressions were positive. We didn't run the quickest tyre and we looked a bit more competitive than usual in FP1 - but unfortunately this press conference conflicts with our debrief, so I don't know as much as I normally would. We've got to get the drivers' feedback and then look at the data. We'll know more tomorrow morning after we run FP2 as well.

Q: It's been almost a year since the takeover by Lawrence Stoll. Can you take a moment's reflection for us and just tell us the impact that that has had on the team and the plan going forward with factory, drivers, things like this?
OS: The impact's been quite positive. Things like bringing a big upgrade here in the past wouldn't have been possible. So, from a financial perspective, we are on a much better footing and our plans going forward are very good. They're strategic but it takes some time to implement. Last year, at this time, for example, we were around 405 people. We're at around 430 now, so not a huge change in personnel, just because it does take time. So there will be a lag between the better financial footing that we're on, the plans that we have going forwards, and actually the implementation. The immediate impact, like you see today, we have a big upgrade here, and that's only a good thing.

Q: Franz, it's a very tight midfield battle this year with rivals like Racing Point bringing performance to their car here in Hockenheim. Can you tell us how you see the pecking order in the midfield, and what plans you've got for upgrades for your car?
Franz Tost: Toro Rosso has also some upgrades here on the aerodynamical side and looks not so bad but of course we have to analyse all the data and everything, set up the car in the proper way with these new aero upgrades and then we will see tomorrow in qualifying where we end up. I think that it's a step forward - but nearly every team comes up with such upgrades and, at the end, in the midfield, which is very close together, it's very decisive, that you continuously improve the performance of the car, come with upgrades and then we will see at the end of the season who had a higher development speed and the most successful development.

Q: Can I ask you quickly about drivers as well. You took a bit of a gamble with both of them prior to this season and both are doing a good job. Your analysis of their first half of the season and plans for 2020.
FT: We have two really good drivers. Daniil Kvyat we knew from the past that he is fast, he is also matured now and he is showing a very, very good performance. Alex Albon, for me, is the positive surprise of the young drivers, together with Norris. I think that he will have a very strong second half of the season because then he knows the car quite well, he knows what's going on in Formula 1, and if we provide him with a proper package, I think that he will come up with really good results. I personally hope that we can continue with these two drivers but this in the end is a decision from Red Bull, and I think the decision will not be made before the end of September / the beginning of October.

Q: Guenther, let's start by looking back, if we can, at Silverstone. I wonder if you could talk to us about the post-race debrief perhaps. What's the fallout of what happened at the start between your two drivers?
Guenther Steiner: I mean everybody saw it. They crashed into each other, I guess, and both had a puncture, which wasn't correct. I want to move on from that. I talked with both of them yesterday. Our focus now is... I mean we could sit there and discuss it over and over. At some stage you need to live with it. It's water under the bridge. We need to get out of this one saying I told the guys... I mean, I expressed my opinion after the race. I want that they focus on here, because we are still... we didn't' get the result we wanted in Silverstone. We again went away with no points. We need to focus to understand better how to get this car to work again - because the car at some point works, and then it doesn't work any more. We need to get a good understanding so after the summer break we can be stable. That is my aim, to have a clear way to go forward where the car needs to be for the different specs of the car here, so we get a lot of data and hopefully can come to a conclusion after the summer break and move on. There was not a lot more said yesterday about Silverstone because it's old news.

Q: Well, you say you've got the cars in different specs here. Is Grosjean still in the Melbourne-spec car? It seems quite a drastic decision to go back to the start of the season.
GS: Sometimes only drastic decisions work, in my opinion. At some stage, if you continue to discuss, back and forward the same thing over and over again, that means you don't know what you're doing, in my opinion. So you need to prove it. It's drastic, and its very unusual, but sometimes you have to look outside of the box to know what to do to get an understanding, Yeah, he's again in the Melbourne-spec car because in Silverstone we didn't get enough data because of the reason you said before, so our aim is now to just understand what we have to do the second half of the season, nothing else. That is our task here and in Hungary.

Q: Mario, thanks for waiting, 2020 tyre testing is ongoing, the latest test taking place after the British Grand Prix. How's it going and what are you learning?
Mario Isola: It's going well. We are testing different constructions, different compounds. We want to change the product for next year in the direction that was highlighted by the teams, by my friend Guenther here, with a wider working range...

MI: He's a consultant... And less overheating, that is, as I've said many times, is something that drivers don't like. So we continue out work. It's important that we clarify for the future what is required to the 18-inche tyre for 2021, because we will start soon to also test the 2021 tyres and we need to agree the targets for that in order to be all in the same direction, because we have only product.

Well, F2 is testing the 18-inch tyre as well. How transferrable is the data you are getting from the F2 car to the F1?
MI: We will collect important data from the test but the level of energy, the level of stress, the forces are that on the tyres in a Formula 1 car are not comparable to F2. But there are some good indications. We did two sessions; we are ready for the third one. We just finished one. We have a good indication from the new size but again, also the size will be different, because Formula 2 will continue with the 245 front and 325 rear, that is the old Formula 1 size. There are many differences but I believe that having one full year of racing with Formula 2 cars next will be quite important to understand how to develop for some elements the Formula 1 tyres.