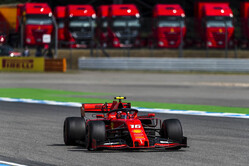 As expected, temperatures have dropped along with the rain, with heavy rain overnight and a further light shower first thing this morning.

That said, the sun is shining, but without the intensity of yesterday

With the possibility of rain over the course of today and tomorrow, this makes yesterday's running pretty much redundant, while also having washed away most of yesterday's rubber.

While Ferrari made the most of yesterday's heat, today's cooler conditions, not to mention rain, will suit Mercedes.

Overnight, Williams found damage to Kubica's car and as a result the spare car has been built for the Pole. Yesterday, Kubica ran with the much anticipated update while teammate Russell ran with the old spec. Today both drivers will have the new spec.

One driver who would like to revert to old spec is Magnussen, who feels the latest upgrade for Haas isn't working, the Dane wanting to follow his teammate's decision to revert to Melbourne-spec. With the requisite parts not available here - which Magnussen described as a "bummer" - the team may yet run both cars in the old spec in Hungary.

Mercedes is certainly taking its tribute to history increasingly seriously. Other than the retro livery and the decorations to the garage, today the mechanics are sporting 1950's cloth caps while the drivers overalls also have a 50s look.

Talking of Magnussen, the Dane is first out, followed by Albon and Grosjean. All three are on softs.

However, once these five have each completed an install lap the track falls silent.

Following several minutes on nothing, an engine explodes into life, it's the Renault of Ricciardo.

Given a pair of retro gloves, Hamilton is having none of it, "just give me normal gloves", he snaps, "normal gloves, they won't fit on".

The Mercedes pair head out, Bottas going off at T2.

In far more suitable conditions, and wearing gloves that fit, Hamilton goes quickest with a 13.767, already only marginally off yesterday's pace. The Briton is on softs.

Albon goes quickest in S1 and Leclerc in S2, the Monegasque subsequently stopping the clock at 13.117. Vettel goes second with a 13.369.

A 13.693 sees Hulkenberg go third, ahead of Hamilton, Gasly, Albon, Sainz and Bottas.

Interestingly, as was the case yesterday, Hamilton is told to do a double cool down lap.

"There's something wrong with the engine," reports Bottas, "entering the stadium, at Turn 12, it slows down massively." The Finn is currently sixth on 13.785.

After 22 minutes, Norris, Verstappen and the Points have yet to post a time.

"Car's completely different," says Magnussen. "In a good way?" he is asked. "Yep."

Guenther Steiner subsequently reveals that nothing on the car has been changed, which suggests the difference is down to the conditions.

"The mirror on the left has cracked," reports Stroll, who can now look forward to seven years of bad luck.

Don't know about you, but we like the white on the front of the Mercedes, pity its not permanent.

Not sure about the senior engineers walking around in suits and braces though.

Raikkonen, currently fifth, has his latest time deleted for exceeding the limits.

In the Mercedes garage there is a lot of work going on on Hamilton's car, while Bottas is still down in 11th.

At 38 minutes, Albon is the first to turn his attention to qualifying. On his first flying lap he fails to improve, while teammate Kvyat has his time deleted.

As Vettel heads out, Mercedes has changed the sidepods on Hamilton's car.

Leclerc goes quickest in S1, the youngster maintaining the pace into S2. At the line he posts 12.387.

However, Vettel goes quicker in S1, however he loses a little pace in the second sector. At the line he posts 12.644, he remains second, 0.257s down on his teammate.

The German clearly doesn't have the same confidence in the SF90 that his teammate has.

As work continues on Hamilton's car, at Williams, Russell's car is up on its stands.

Though he only improves in the second sector, Leclerc consolidates his top spot with a 12.380. Teammate Vettel fails to improve, despite posting a PB in S2.

Hamilton heads out with ten minutes remaining, as Sainz reveals that he is not happy with the changes made overnight.

Hamilton goes quickest in S1, but loses time in the second sector. At the line the world champion posts 12.793 to go fourth... however, he appeared to exceed the limits at the final corner.

Magnussen goes fifth with a 12.893, as Hamilton's time is deleted, sending the Briton back down to seventh.

"Engine issue, engine issue," reports Grosjean, who is told to slow down.

Sainz goes sixth with a 13.300, ahead of Gasly and Hamilton.

As Hamilton improves to sixth (12.965), Leclerc heads out on a brand new set of softs.

With three minutes remaining, both Renaults are at the wrong end of the timesheet, as are Kvyat, Stroll and Giovinazzi.

"Let me know if you're interest in another lap," Bottas is asked. "No," comes to reply.

A late improvement sees Hulkenberg go twelfth with a 13.496.

With seconds remaining, Hamilton heads out again, seemingly for a practice start.

An interesting session and one which sets us up nicely for qualifying and indeed the race.

It's cooler, but that clearly hasn't helped Mercedes as much as thought. And what do the weather gods have in store?