Magnussen: It's a bummer! 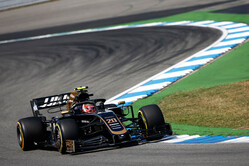 This weekend, for the second successive race weekend, Haas its running its two drivers with entirely packages, Kevin Magnussen using the latest updates while teammate Romain Grosjean has reverted to the spec used at the season opener in Melbourne.

Team boss, Guenther Steiner admits that it's a drastic move.

"Sometimes only drastic decisions work, in my opinion," said the Italian. "At some stage, if you continue to discuss, back and forward the same thing over and over again, that means you don't know what you're doing, in my opinion. So you need to prove it.

"It's drastic, and its very unusual, but sometimes you have to look outside of the box to know what to do to get an understanding, Yeah, he's again in the Melbourne-spec car because in Silverstone we didn't get enough data, so our aim is now to just understand what we have to do the second half of the season, nothing else. That is our task here and in Hungary."

However, following two difficult sessions in which he was out-paced by his teammate, Magnussen claims the updates are not working.

"It's been a little bit of a confusing day," said the Dane. "We'll see what we can learn in the data tonight, and then make a decision about what we're going to do for tomorrow.

"We didn't have grip today, overall it just wasn't performing well," he admitted. "I don't want to make any conclusions yet, but the upgrades didn't work immediately.

"It looked like a very big gap today and that's not what you want to see when you're bringing new upgrades. You want to make progress. Initially it didn't seem like it has done that and it was the same with the upgrade for Barcelona. But we have to pursue knowledge and try to understand why these upgrades that were meant to be better, weren't.

"I can't go back to Romain's car this weekend, which is a little bit of a bummer, but we also need to learn, and that's the work I'm doing, we're continuing the development, it's important to learn about these new upgrades but we need to bring upgrades in the season that are better.

"If the difference is as big as it was today, we've got to look at maybe just going back to race one with both cars," he admitted, "to make the best of this season, to try to get as many points as we can with that car."

While the necessary components which would allow Magnussen to run in Melbourne-spec are not available this weekend, it's understood they could be in place for next weekend's Hungarian Grand Prix.

"I haven't seen the forecast but I'm hoping for some crazy weather," said the Dane.