Wolff: We need a strong Ferrari 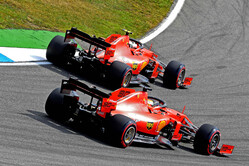 Following the technical failures that eliminated both Ferraris in qualifying, among the very first to give some moral support to the beleaguered team was Mercedes boss, Toto Wolff.

With the Maranello outfit having dominated every practice session, and looking set to lock-out the front row, Sebastian Vettel was sidelined in Q1 while his teammate suffered an issue that prevented him taking part in Q3.

Shortly after, the cameras caught Wolff commiserating with Vettel in the paddock, and subsequently putting a friendly arm around Mattia Binotto.

"It's a real shame for Ferrari and a shame for Sebastian at his home Grand Prix," said Wolff. "We really need him here for the crowd, and you can see that it's a bit subdued at the moment.

"We need Ferrari for a strong Championship too," he continued, "but for us I'm happy... the session started awfully, and we didn't understand why we were lacking pace, but slowly it came towards us."

"It's such a shame," added pole-man Lewis Hamilton. "They do all that in practice and then you get to qualifying and ones out in Q1. I was definitely looking forward to that battle but it wasn't meant to be."

"They've been really fast all weekend, and we brought some upgrades this weekend as well, so the car's been feeling good but the Ferraris were just really I think on a slightly other level," he admitted. "But I think the time at the end was good enough to be able to compete at least with Leclerc, if he had done a lap at the end. It would have definitely been close between us.

"Ultimately, it's difficult when you do all the practices and then you go into qualifying and something happens as soon as you go out. That's definitely a horrible feeling for everyone so they will definitely be feeling it. But I think we've all been there. Hopefully they will recover tomorrow."