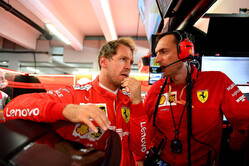 Dire is the only way to describe Scuderia Ferrari's performance in qualifying for the German Grand Prix at the Hockenheimring. Two unrelated problems sidelined Sebastian Vettel and Charles Leclerc, so that they were unable to capitalise on the potential they had shown in free practice.

Sebastian's qualifying was over practically before it started. On his lap out of the pits, the German felt a drop in power on his car, which was traced to an airflow problem for the turbo. He managed to bring the SF90 back to the pits but it proved impossible to fix the fault in time. Sebastian therefore starts from the back of the grid.

Charles made it through to Q2 with a best time of 1'12"229 on the Soft tyres, fitting the Mediums for the second phase. The Monegasque posted a 1'12"344 and returned to the garage. A problem was then discovered on his SF90, this time linked to the control system for the fuel pump. The mechanics tried all they could to get Charles back out on track before the end of Q3, but it wasn't possible. He will therefore start from tenth on the grid.

Charles Leclerc: "It's a shame for us to have finished qualifying this way. The weekend was going well up to that point and the car felt really good throughout. Sometimes, these things just happen.

It is difficult for a team to miss an opportunity with one car, but when it happens with both it is even harder to take. I will start the race with a positive mindset tomorrow and will fight to gain as many positions as possible, especially in the beginning. I have confidence in our pace and nothing is over until we see the chequered flag."

Sebastian Vettel: "I was looking forward to having fun this afternoon, as the car has been really competitive all weekend. So what happened is definitely a great shame. I had a good feeling from the car yesterday and it was even better this morning. We had a chance to start from first place, but now we start from last. Of course it is bitterly disappointing, especially that this should happen here at my home race, in front of such a large crowd of fans.

It could not have happened at a worse time. As for the problem itself, I had no warning that anything was wrong and as I exited the pits, I just lost power. But I am still looking forward to the race and I will try my best to make up as many places as possible, in the hope of at least bringing home some points."

Mattia Binotto Team Principal: At the moment the entire team is bitterly disappointed. We feel especially sorry for our drivers who were in with the chance of doing something special for the people back in the factory who are working so hard and for all our fans.

We are now carrying out an in-depth analysis of what happened. What we do know is that they were two completely different problems, neither of which had ever occurred before. The first indications from Sebastian's car lead us to believe it could be related to a component on the intercooler. The component is to the same specification as those used previously and it was fitted new. Charles had a problem with the fuel pump control unit.

We have shown this weekend that our race pace is good, which makes it even more frustrating that we were not able to show what we could do in qualifying.

We are angry with ourselves and I myself feel responsible for what has happened. But I am also aware that we must react calmly and do our best tomorrow. That's what we're here to do."