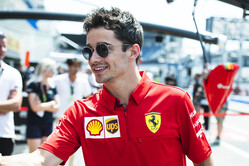 As both Ferrari drivers admit to ongoing issues with the SF90, in terms of the handling of the car, Charles Leclerc reveals that his 2019 contender, and the move up to Ferrari, has caused him to change his approach.

Talking at the start of the Hockenheim weekend, the Monegasque revealed that he began changing his approach over the weekend of the French Grand Prix. Previously, as the 'new boy' at Maranello, he felt slightly intimidated and reluctant to tell the team how to go about its business.

"Before France, it was more myself that was adapting to the car," he told reporters. "After that I think changed a little bit the approach, and I think I adapted the car a little bit which enabled to drive me a little bit more naturally, which helped me.

"Arriving in such a big team - when I arrived it was only my second year in Formula 1 - you are a little bit intimidated, I was a little bit intimidated and just to arrive and straight away say 'I want this, this and this' was not the way I wanted to start this relationship. So at first, I wanted to understand the car, try to adapt my driving as much as possible to the car.

"At one point I managed to do good things adapting my driving style," he continued, "but then I felt there was more performance by trying to put the car a little bit more into my direction and this has helped the performance a bit since then."

The youngster feels that the rear end stability of the SF90 is more of an issue for his teammate.

"To be completely honest on that point, I struggle or feel it less," he said. "He's complaining a little bit about entering stability which doesn't affect me as much.

"But yeah, we are trying to... These are the weaknesses and we know them, and we are trying very hard to try and fix them as soon as possible.

"At the end I feel comfortable with the car, it has some weaknesses but in the end I think Seb has done very good races too, maybe he hasn't been so lucky in the last few but I'm very sure soon he will be back on top, it's just a matter of time. At the moment I just feel good in the car, happy with the car. As I said, we still need to be working, especially on our race pace and that is what we are doing to make improvements soon."

"We had occasions where things were looking very good and other occasions where it was a bit more difficult," said Vettel, "but I think that's also pretty normal throughout the season: you have different tracks with different characteristics and sometimes the car feels more the way you like and other times less - but yeah, I think we have, after the first couple of races we were able to get quite a good picture of what was missing compared to the performance we seemed to have at the beginning of winter testing.