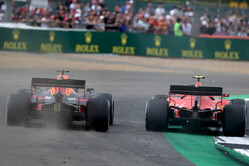 Speaking at the start of the Silverstone weekend, Charles Leclerc admitted that the stewards decision to class Max Verstappen's race-winning move on him in Austria as a "racing incident", effectively gave him the green light to be a little more aggressive in future encounters.

Days later the Monegasque was true to his word.

The youngster was involved in thrilling battles with both Red Bull drivers, and so robust was his defence while battling Verstappen that the Dutchman, known for his own elbows out approach to defending his position, voiced his unease as his rival's tactics.

Verstappen subsequently suggested that Leclerc's approach was very much down to what happened in Austria.

"I think he was a little bit sore still from Austria so he was defending really hard," said the Dutchman, "but it's fine, I'm all for that.

"I didn't want to take too much risk in those battles to damage the car," he continued, "because I knew we were quite a bit faster. So I just needed to pick my moment, but then luckily the team did it for me with a good strategy, and then it was all looking good of course for a good result."

Ironically, it was Leclerc's teammate, Sebastian Vettel, who was to ultimately deny Verstappen, clattering into the rear of the Red Bull in the latest in a string of mistakes by the four-time world champion.

In contrast to recent races, the stewards kept a low profile at Silverstone, other than handing Vettel a 10s penalty for causing the collision which ended Verstappen's hopes. Asked if he would like to see this new 'let them race' approach continue, the Dutchman grinned: Would be good, yeah. I think it was nice racing."