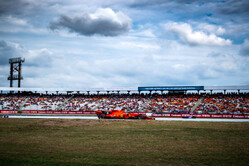 On a weekend he sought redemption for a year of mistakes and frustration that began twelve months ago at this his home circuit, Sebastian Vettel was instead left "bitter and frustrated" after being let down by a technical issue that left him last on the grid.

On a day Ferrari team boss, Mattia Binotto admitted was "dire" for the Maranello outfit, Vettel was sidelined by a turbocharger issue which meant he failed to post a time in Q1, while teammate, Charles Leclerc, who suffered a problem with the control system for his fuel pump was unable to post a time in Q3 despite being widely tipped to take pole.

"I had a good feeling yesterday, better this morning, didn’t put everything together so I thought we have a really good chance," he added. "But now I’m not having any chance so I’m looking forward to tomorrow."

Although out-paced by his teammate for much of the weekend, Vettel had looked strong, and though the slightly cooler conditions today appeared to play into Mercedes hands, Ferrari still appeared to have the edge.

"I’m sure there’s a reason for what happened so obviously it’s the worst possible timing but it is what it is," said Vettel. "We certainly didn’t want that to happen, we need to understand what it was and make sure that it never happens again, but there's nothing we can do now."

"At the moment the entire team is bitterly disappointed," said Binotto. "We feel especially sorry for our drivers who were in with the chance of doing something special for the people back in the factory who are working so hard and for all our fans.

"We are now carrying out an in-depth analysis of what happened. What we do know is that they were two completely different problems, neither of which had ever occurred before.

"First indications from Sebastian's car lead us to believe it could be related to a component on the intercooler. The component is to the same specification as those used previously and it was fitted new. Charles had a problem with the fuel pump control unit.

"We have shown this weekend that our race pace is good, which makes it even more frustrating that we were not able to show what we could do in qualifying."