Wrong to compare Mick Schumacher with his father, says Vettel 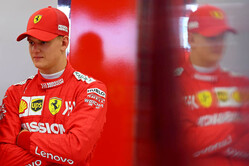 While there is no F2 at Hockenheim this weekend, Mick Schumacher will still get the chance to drive in front of his countrymen when he takes to the track in the Ferrari F2004, driven by his father on his way to his seventh F1 title in 2004.

Prior to qualifying and before the drivers' parade on Sunday, Mick will drive the car on a track where the Schumacher family has enjoyed so much success.

Michael won four times at Hockenheim in Formula 1; in 1995 with Benetton and then in 2002, 2004 and 2006 with Ferrari. It was at this track also that Mick won the FIA Formula 3 European Championship last year, his first ever series title.

However, ahead of what will clearly be an emotional moment for all, Sebastian Vettel warned that people must not compare the youngster to his seven-time world champion father.

Currently 14th in the F2 championship, and yet to make it to the podium, Mick, a member of the prestigious Ferrari Driver Academy, is already being linked with a move up to F1.

"I think it's crucial that he's given the time he needs," said Vettel. "I think it's fair to judge him and his racing like every one of us has been judged and will be judged, but it's not right to measure and compare too much to other people and to his father.

"I don't think it's fair," he continued. "It's a different time, different racing but for sure. Michael was the one who set off a huge hype when we were kids and therefore the name Schumacher is one hundred percent known in Germany due to him. Obviously to have Mick at the doorstep of F1 and one day hopefully joining would be huge and hopefully a big boost for Germany.

"On top of that, despite the name, he's a great guy, he's a nice kid so I think our fingers are crossed for him.

"There's been a time when I think we had a lot of Germans in Formula One - like six or seven - and everyone was wondering why and so on. Now we have two we don't get these questions any more but back then I think there were zero French guys and now you have quite a lot of French guys in Formula One and very close so I think it's just how it goes around but yeah, hopefully he gets the chance one day and does well and brings some more enthusiasm."

Asked about the lack of Germans coming up through the ranks, Vettel replied: "Germans are quite straightforward with the way they spend their money and unfortunately junior racing, starting from karting and through the series after that are - I think - way too expensive.

"Nico (Hulkenberg) and myself we enjoyed each other in go-karts and racing each other. I think the background is not that dissimilar.

"I think giving us the same chance today, I think our career would stop fairly soon because we simply wouldn't have the pocket money to do it. So, I think overall, to allow more kids - boys and girls - to start racing, the sport would need to be a lot cheaper, as currently I think it's way too expensive and unaffordable for most."