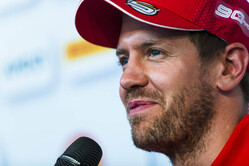 While many of the current F1 drivers admit to having little knowledge or even interest in the history of the sport, Sebastian Vettel is one of the exceptions.

Other than an almost encyclopaedic knowledge of the sport, the German is a purist and openly admits that he hankers for the 'old days'.

Speaking at Silverstone, the circuit which hosted the first ever Formula One Grand Prix, Vettel admitted that he is waiting to see what Ross Brawn and his team come up with in terms of the 2021 rules package before deciding his future.

Uninterested in budget caps and historic bonuses, Vettel is hoping for a rejuvenated F1 that allows for closer racing throughout the field, a formula that places the emphasis back on the driver as opposed to the boffins.

"I still need to look at in a way that I say the cars are exciting, the formula is exciting," he said. "Time is ticking obviously.

"It's good we've been asked," he said of the fact that Ross Brawn has called on the drivers to get actively involved in the rule-making process. "We gave our opinion and we will give our opinion again.

Asked where he believes current F1 cars rank, compared to those he drove earlier in his career, he said: "At high-speed they are top of the class, at low-speed, I wouldn't say bottom of the class... they are just too heavy.

"It's something I don't like," he admitted. "I think the Formula 1 car that I got to know first was very exciting throughout the speed ranges. And the race turned out to be a sprint race, which was great because you could push yourself and the car and the tyres every lap.

"That has changed a bit," he said. "We are managing some races more, some races less. Some management will always be here and rightly so. You need to also use your head, not just your feet and hands. But still the one rewarded most should be the fastest guy."