Seidl: Budget cap is the only way McLaren can compete for titles 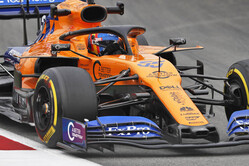 While it looks as though Chase Carey has agreed an eleventh hour bid to secure the future of the British Grand Prix at Silverstone, there remains the little matter of the 2021 rules package, an all-encompassing blueprint for the future of the sport, both technical and financial.

At the heart of it is the planned budget cap that will limit all teams in their spending in a bid to reduce costs and level the playing field.

McLaren team principal, Andreas Seidl, admits that the budget cap - something that F1 has wrestled with for as long as anyone can remember - is essential if his team, and its midfield rivals, are to take on the big three in fighting for wins and titles.

Though still to be agreed, it is proposed that the cap will be introduced officially in 2021, with a 'dry run' planned for next season. Teams will be limited to spending £140m ($175m) a year, though this doesn't include driver salaries, engines, the salaries of top executives and marketing.

"It is fact that we as a team clearly underachieve with the possibilities we have, infrastructure, budget, know-how," says Seidl, according to Motorsport.com. "We should be better with what we have.

"I'm not a friend of constantly looking for excuses within the regulations or budget differences," he continues. "At the moment, my focus is to first of all unleash the potential of the team with the circumstances we have. The next step is that the 2021 regulations will hopefully go in the right direction. One thing is clear: if we want to be competitive in the future and fight with the others, then we need a level playing field. For a team like us, the budget cap is the only way we can ever fight with the three big teams again."

While spending must indeed be curbed, one cannot help but feel that effectively handicapping the bigger teams will in some ways devalue the championship, in football terms limiting the likes of Manchester City and Liverpool in their spending in order that the likes of Brighton and Burnley have a chance of winning the league.

While the big clubs often have a rich backer, their success (or failure) on the field means they can spend more on better players (and managers), thereby compete at a higher level, which will bring in more revenue, this, in turn will attract more fans at home and around the world who will be more willing to pay for season tickets, TV coverage and merchandise.