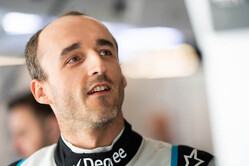 Shortly after the end of the race, Alfa Romeo was summoned by the stewards, on the recommendation of FIA technical delegate, Jo Bauer after the team's race start data was found not to be in compliance.

It was subsequently revealed that the team was under investigation for an alleged breach of Article 27.1 of the sporting regulations, relating to clutch torque application at the start of the race, at the same time it was revealed that the team was also being investigated under Article 9.3 of the technical regulations, which relates to traction control.

According to the regulations: "No car may be equipped with a system or device which is capable of preventing the driven wheels from spinning under power or of compensating for excessive torque demand by the driver. Any device or system which notifies the driver of the onset of wheel spin is not permitted."

Announcing their decision, the stewards noted that "the clutch is controlled electronically via the Common ECU. However, the teams have the option to tune some of the controlling parameters.

"In order to prevent the teams from using this tuning to affect the way in which the clutch engages at the start of the race in a way that could potentially mimic traction control or other advantageous schemes, the FIA requires that the torque in the clutch matches (within specified limits) the torque demand as the driver releases the clutch. This must occur within 70 milliseconds.

"In the case of both cars of Alfa Romeo Racing, the time that it took for the torque to align with the torque demand was close to 200 milliseconds and 300 milliseconds respectively. This provided a more gradual application of the torque, which given the wet conditions was a potential advantage. Regardless of whether there was an actual advantage, the Stewards determined that this was a clear breach of the guidance given to the teams as to how this would be adjudicated.

"The Stewards held a hearing and reviewed the data, with three members of the team present, including the engineers concerned, along with the FIA Technical Delegate and his assistants responsible for these checks. The team accepted that they were not within the required limits.

"The Stewards accepted the team's explanation that the cause of this was that they were caught out by the unusual weather conditions and the fact that they did not do any practice starts under these climatic conditions and set the parameters in a way that failed to meet the requirements.

"However, the Stewards noted that the FIA Technical Delegates check this parameter on all cars, and that no other irregularities were found. The obligation to meet the requirements is irrespective of the climatic conditions. Therefore, the Stewards considered that a Breach of Article 27.1 occurred."

While the stewards ordered ten-second stop-and-go time penalties for both drivers, as this was applied after the race it was converted to a 30 second time penalty in accordance with Article 38.3 d.

The penalties for Raikkonen and Giovinazzi drop the pair to 12th and 13th, thereby promoting Romain Grosjean to seventh, Kevin Magnussen to eighth, Lewis Hamilton to ninth and Robert Kubica to tenth, thereby giving Williams its first point of the season.