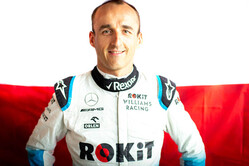 We've reached the midway point of the 2019 season as Hungary marks the final stop on the calendar before teams are rewarded with a well-earned break during the annual summer shutdown.

The Hungaroring is one of the shortest tracks on the calendar, and its popularity amongst drivers, teams and fans doesn't go unnoticed for its location near the beautiful city of Budapest. On top of this, the Hungarian Grand Prix is the closest event to a home race for Robert Kubica and we expect to see many Polish fans in attendance.

Dave Robson, Senior Race Engineer: Following the high-speed and high efficiency circuits of Silverstone and Hockenheim, the opening part of the 2019 season finishes at the high downforce, low efficiency Hungaroring.

The track was renewed in 2016 and now has a fairly smooth and consistent surface which is less demanding on the tyres. As in Germany, Pirelli have made the middle of their compound range available and so C2 is the Hard, C3 Medium and C4 the Soft tyre. How these will behave will depend on the track temperature, which can regularly exceed 50°C during August in Budapest.

Since winter testing began in mid-February, we have completed 11 race events and five test events in little over 20 weeks. The schedule demands a lot of the team, both at the factory and on the road, and it is to everyone's credit that we arrive in Hungary with further parts to evaluate ahead of the second half of the season, which begins with the traditional back-to-back races in Spa and Monza that marks the end of the European season.

We approach the race in Hungary as we do any other, with tyre testing and parts evaluation on Friday before we switch focus to qualifying and the race. Once pack-up is complete on Sunday evening, the whole team can start to think about some well-earned rest and recuperation before we head off to the Ardennes for one of the best races of the season.

Robert Kubica: Hungary is the closest event to a home race for me and so even though it's not in Poland, I expect a lot of Polish fans to attend. I made my Formula One debut at the 2006 Hungarian Grand Prix and it was the first Formula One race I attended when I was 12 years old in 1997. There a lot of things that I can relate to with Hungary, so let's hope for a good weekend. Finally, I would like to thank the fans for their support during this difficult period.

George Russell: Budapest is one of my favourite races of the year. The circuit has a good flow to it and the fans always provide a great atmosphere. It's the last race before the summer break, so we are going to make sure that we enter the holidays satisfied that we got the most out of our package.