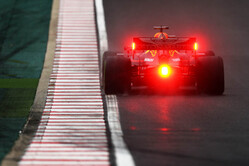 Ahead of today's second practice session, the air temperature is 24.2 degrees, while the track temperature is 32.4 degrees. It remains somewhat overcast, with a definite chance of rain at some point over the next ninety minutes.

Lewis Hamilton topped the timesheets earlier in a session which saw Mercedes bookend proceedings, Valtteri Bottas failing to post a time after developing a misfire which led to the team changing his engine.

Mixed weather conditions didn't help matters in a session which saw a number of offs which incurred front wing damage, and spins, with Max Verstappen spinning twice as he claimed his car to be very sensitive.

As ever, the session was very much about testing, with a number of teams carrying out back-to-back tests, with one driver trying one spec and his teammate another.

In the moments before the start of the session light rain begins to fall. Bottas heads the queue at the pit lane exit, ahead of Gasly, Ricciardo, Hulkenberg and Raikkonen. Hamilton is also out early.

"Rain reported in this (S2) sector only," Bottas is told.

Within no time at all there are 18 cars on track, the Racing Point duo the only 'no shows'.

A fair mixture of compounds, with both Mercedes drivers on the hards.

Just 4 minutes in the session is red flagged after Albon crashes in the final corner.

Replay shows him dip a wheel on the grass as he approaches the corner, the Thai a passenger as the Toro Rosso spins and hits the barriers. Indeed, on hitting the barriers, the car bounces back into the air before coming to rest.

Raikkonen had just gone quickest (19.174), ahead of Gasly, Bottas, Hulkenberg and Kvyat.

"It's not super comfortable out here," says Kvyat. "All the kerbs are quite wet, as well as the Astroturf and white lines, stuff like that"

The session resumes and once again Bottas leads the way, followed by Sainz and Stroll.

Giovinazzi takes full advantage of the run off at T4, as Verstappen begins his first flying lap of the afternoon. T4 is where the Dutch driver damaged his front wing in FP1.

"I think it's stopped a little bit now, the rain," says Hulkenberg.

Another improvement for Hamilton sees the bar raised to 17.995, with Verstappen banging in a 17.909 moments later.

Currently 13th, Vettel cuts the chicane, as Gasly goes quickest with a 17.854.

Contrary to what Hulkenberg thinks, Verstappen believes it is raining harder.

On board with Hamilton and the Briton see-saws the steering wheel in his attempts to keep it all under control. He pits.

The track falls silent as the drivers head back to the pits.

In the McLaren garage, mechanics are working on Norris' car, which has a suspected hydraulic leak, and which has only done 5 laps. The Mercedes pair have done 12 apiece.

Bottas heads out on Inters, as Albon admits that his off was down to "driver error". "I think with the track being wet, the grass being wet, as soon as I touched it I spun," he says. "It's frustrating, but I'm okay."

"Good track conditions, ready to go," Perez is told, the Mexican heading out on Inters.

As more drivers head out, his hydraulic leak seemingly sorted, Norris joins them.

Like Bottas the drivers discover what Mercedes already knows, too dry for Inters, too wet for slicks.

Again, the track falls silent... until Sainz heads out for his exploratory lap.

Norris is with Sainz talking to Andreas Seidl on the pit-wall, however the Briton is in civvies, suggesting his session is over.

The Spaniard subsequently heads out again, this time on mediums. "It raining heavier than ever now," he reports. He does well not to hit the barriers after going wide in T12.

Told that the marshal posts are not reporting rain, he replies: "They must be having a beer then".

As the Finn heads back into the pits, Vettel heads out as do Leclerc and Russell. All three on Inters.

Verstappen heads out on the Inters, along with Magnussen.

Russell gets it wrong at the chicane, while Magnussen is showing unusual caution.

Fact is, though the conditions are clearly now more suitable for the Inters, with Saturday and Sunday expected to be dry nobody is actually learning anything.

Going 3s quicker than anyone else, Verstappen is firmly told that the team is "happy with that". In other words, 'that's enough!'.

Hamilton has opted not to run again on the Inters, while teammate Bottas is back on track.

The rain continues to fall, but still not wet enough for the full wets.

With 5 minutes remaining, Hamilton heads out on the green-banded tyres.

Drivers taking some very strange lines as they seek out the wetter parts of the track.

A late stop for Bottas who has mediums fitted... but it's a practice pit stop, nothing more.

Vettel and Hamilton appear to be pushing that little bit harder, both hanging out their rear ends as they exit Turn 13.