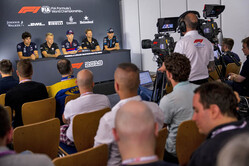 Daniil, if we could start with you. It's been a whirlwind few days for you with that podium finish last time out and the birth of your daughter. Have your feet touched the ground yet?
Daniil Kvyat: Yes. I mean, it's OK, we are already here in Hungary now but talking about last week it was a quite special 24, or 48 hours, either way you want to look at it. Obviously I found out on Saturday night that I became a father, that my daughter is born and is doing great, so it's a great feeling - but obviously the next day there was a race to do. It was important to stay focused on it. The race was great as well. It's a podium. So, many things happened in 24 hours for me and, yeah, fantastic feeling. Happy few days after and now we're here.

Just tell us about your schedule in those following days. Where have you been?
DK: Went straight to hospital on Sunday night, slept there with them - not too much sleep straight away after the race. So, for me, it was good. And then just home until leaving here to Hungary. Bit of recovery between races, light training but obviously always visiting Kelly and our daughter. And that's it. Yesterday I arrived here.

What was the reception like in the Formula 1 paddock to your podium. Did you get a 7am phone call from Dr Marko on Monday morning?
DK: No. You should tell me! You're a journalist, how was the reception. Generally, talking about the team, everyone was very happy. I think first podium in 11 years for our team. It was a fantastic achievement and I think we were very happy. Everyone. Every member of the team. I was so happy to see that everyone was so happy in the team. When I crossed the start-finish line it was a very special feeling. A lot of emotions. I really enjoyed those few hours after the race. It was unforgettable.

Robert, talking of happy vibes in a team, there was certainly a happy Williams team late on Sunday evening when news came through that you've got the point. You've scored many World Championship points in your career - 274 - but how different was this one to the ones that came before because of what it meant to Williams?
Robert Kubica: Yeah, I mean, you know, it's a bit mixed feelings in the end because of course it's good to have this one point on the scoreboard but the way it came is for sure is not the way you would expect. Of course, it was a crazy race, many mistakes. We managed to stay on track, although our pace was questionable but still, managed to keep it on the black. And then, with Alfa being penalised, we gained two positions, so it meant that we would be tenth, which is for sure good - but still we have to keep working, keep pushing and definitely this point is somehow... thanks to the guys which are doing a great job on track, pushing really hard, we are really not having a great moment but still, Hockenheim was also thanks to them.

What's your realistic assessment of the upgrades the team brought to Hockenheim?
RK: Realistic, well, it's good to have them. I think it's something for which they've been working for long. We do see some improvements. Of course it's difficult to judge and compare Silverstone to Hockenheim: completely different tracks ambient temperature, so all those things were not easy to have clear judgement. Our guys can see the improvement in the data - but I think everyone is improving, so you know in order to close the gap we need to make bigger improvements compared to our competition and this is not easy with Formula 1 standards: all the teams are pushing hard - so it is a big battle, I think even more at home in the factory, that the people are working hard but you know it's so difficult with current Formula 1 teams to close the gap to them.

Lance, fourth was a great haul of points for you at Hockenheim. Are you sensing an upward curve from the team from now on.
Lance Stroll: Yeah, it was a great result. Like you said, a lot of points. We were really happy about that. I am sensing some improvement. I definitely think we took a step in Hockenheim, looking at our pace throughout the weekend, Friday, Saturday, we were much more competitive than we've been in recent events, which is always a good thing. That being said, it's still very, very tight in the midfield and every tenth counts. I'm sure it will be very track-dependent from now until the end of the season - which tracks suit our car, more than others. But yeah, it was a great Sunday but also a much better weekend in terms of performance and where we've been throughout the weekend in comparison to other weekends.

So, more performance in Hockenheim but just looking at the season so far, as a whole, how has this year compared to your previous two seasons in Formula One?
LS: Every year is unique in its own way. When I reflect on the last couple of years, I definitely think that the sport is much more competitive than it was two years ago. Looking back at 2017 when I came into it, it was... yeah, there were much bigger gaps between the teams and I think, at the time, coming into the weekend, when I was at Williams, we had a pretty good idea where we'd be relative to the competition. And in the race it was, yeah, there was definitely more guarantee of scoring points - and now you really see tight margins between the teams and very close racing in the midfield. Last year, of course, was a challenging season for me at Williams. We didn't really have the pace to score points like we did in 2017. When I look at this year in comparison to a couple of years ago, it's definitely become much more competitive, the sport - which is a good thing. I think, hopefully, in the near future, we can start seeing that from first place onwards where we can be battling between teams every event.

I'd like to come on to Kevin and Romain together now. First up, congratulations on the double points finish in Hockenheim, however the race marked the third time you guys have hit each other on track this year: Spain; Silverstone and, of course, Hockenheim. I just want to ask why this keep happening? Kevin, perhaps we could start with you?
Kevin Magnussen: I don't know really. I think it's... you know... it's happened a few times this year and, in terms of... it happened in Silverstone and it had a consequence for both of us. We punctured. I think that was pretty unlucky, to have two cars puncturing for such a small contact. There were no bad intentions from either of us in that moment. It was just... we came together and then punctured . Later in the race you see other cars flying into each other, flying over the track and nothing happened. Got to look at that as well to say, bad luck really. That's pretty much it.

Romain, your thoughts
Romain Grosjean: We love each other. That's why we get on, have a bit of a kiss on track. No, I think, as Kevin said, there's been a bit of bad luck in Silverstone. I think the relationship, people could think that it doesn't look good but actually the relationship with Kevin is really good. We phone each other once a week or so. We sat down and said, 'what can we do better', just to make sure that's not happening again. Obviously we've got the same car, so it's happening that we are side-by-side on track more often than with the Mercedes, for example. Yeah, there are things we can probably do better. I think the most important is that we always try to do our best for the team, and give our best and maybe just the cursor wasn't well positioned on some of the occasions we had, and we just going to make sure we get better from there. Honestly, the relationship is very good and we actually like - well, I like working with Kevin, maybe he doesn't - but I think he likes it also. We work well together and we get on nicely.

KM: I think in the heat of the moment, we're blaming each other on the radio and stuff like that - but what people don't see is that we get together between the races and talk it through and try to be constructive and move on in a constructive way. Apart from those incidents on track, I feel that we have a pretty good working relationship. And actually, Romain is a cool guy, and we actually have a good time when we go to work. So, it's being blown out of proportion a little bit. I know you guys love a bit of a conflict and stuff like that, so... but it isn't as bad as it looks.

(Peter Vamosi - Racing Line) A question for Robert. First of all, you really have good heritage here at the Hungaroring, you've scored many points here. Do you think this year, with the Williams, at this track, where you don't need so much power, can you score again?
RK: Well, I think, actually, Hungary has never been very lucky for me. I don't remember how many points I scored. I think the power is the only area where we are not lacking anything in our car, so power, thanks to Mercedes' power unit, is the strongest area of our car. This track is very complex. I think there are sections that require a lot of mechanical and aero grip, so I would say it's not the kind of track where we will be closer to the competition than others.

(Luke Smith - crash.net) Romain and Kevin, Guenther has said that he is going to have to take a firmer approach with you two to stop these clashes on track - rules of engagement, things like that. What's your response to that? Do you feel it is necessary to put this in place between you two? Is it disappointing that that action has to be taken?
RG: No, I think again we are here to do the best for the team and if that's the solution, the short-term fix, then why not. I think, as I say. We're not here fighting for the first or second place in the world championship. I don't really give a damn if I finish 14th or 16th at the end. We don't have a fast car at the minute and the focus is on getting that car to work well. The team has been reverting me back to the car from Melbourne. I have been running for three events now, just trying to understand everything, so I think the bigger picture, the big keys, is to understand how we get faster and better, how we can come back in the Constructors' Championship and to make sure that the future of the team is not compromised by a non-understanding of the car.