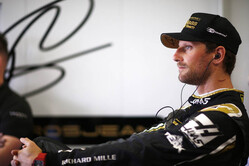 Just two weeks after clashing at Silverstone, both cars subsequently having to retire, Haas drivers, Romain Grosjean and Kevin Magnussen were at it again during the German Grand Prix.

Thankfully, though the pair banged wheels as they battle for position, there was no lasting damage, ironically the subsequent penalties handed to the Alfa Romeo team meaning the Haas duo reaped the team's best points haul of the season.

Still smarting from the Silverstone clash, which followed a similar incident in Spain, team boss, Guenther Steiner, was left almost apoplectic, leading to speculation that at least one driver could be replaced over the summer break.

However, speaking to reporters at the start of the Hungarian Grand Prix weekend, the Italian ruled out such a move, saying it would be "desperate".

"I'm not thinking about it," he said, when asked if he had considered dropping one of the pair. "It's part of it, but that doesn't make a lot of sense.

"Then you just open up more questions than answers," he continued. "You disrupt a lot of other things, so that would be a desperate move almost if I have to do that one."

Magnussen, who has a deal for 2020 with the American team, says he respect Grosjean, but the continued clashes suggest that the pair have little mutual respect and even less for their team.

"When you make a decision the team chemistry comes always into it," said Steiner, when asked if the drivers' relationship has played a part. "Who is pushing who, all that stuff, it's nothing new to think about when we make our driver choice for the future.

"If they don't get on personally I cannot fix that," he said, "indeed, as long as they respect the team and do what the team wants them to do, I'm fine with that.

"If they don't speak to each other, as long as they don't do anything negative towards the team, I have to live with that and I can live with that. Trying to force somebody to have a good relationship with somebody doesn't work. I'm no psychologist but I know this much.

Revealing that he will speak to both drivers about the Hockenheim clash today, he admitted that measures need to be put in place to prevent a reoccurrence.

"It could have happened the same again," he sighed, "they both damage the car and you don't take points home. I think I say nothing, think about it, then say something. If I get the same type of upset with them as at Silverstone, that's not constructive.

"I need to come up with something better. To get proper control of it and move forward because it's not acceptable towards the team. The team is suffering if we keep on doing this."