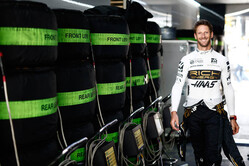 In Q2, Grosjean and Magnussen were separated by just two-hundredths of a second, but that meant the difference between advancing to Q3 with the rest of the top-10 and calling it a day early. Grosjean's 1:12.769 was the ninth-best lap of the session while Magnussen's 1:12.789 was good for only 12th. Magnussen, who qualified in the top-five in two of his three previous visits to Hockenheim, including fifth with his Haas VF-19 last year, was just 13-thousandths of a second back of 10th.

In Q3, Grosjean laid down the sixth-best lap of 1:12.851 to equal his best qualifying effort of the year, set at the season-opening event in Australia. It also put him sixth on the grid at Hockenheim for the second year in a row.

Romain Grosjean: "I think from yesterday to this morning, Kevin (Magnussen) was very happy with the new package, there's some good understanding of the upgrades here. Obviously, with track temperatures coming up a bit in qualifying, I was happier with my car. You always want to be on top of the midfield, but today the Alfa Romeo was just too strong for us - it's super tight in the midfield, which is exciting. Who knows what will happen tomorrow, we'll do our best. Sometimes this year we've had good qualifying sessions followed by tough races. Hopefully this isn't one of those and we can hang in there with some good race pace. Yesterday we were happy, and the cooler temperatures should help us in the race."

Kevin Magnussen: "I had a very good car this morning in FP3, yesterday it was really tricky, we just had no balance at all. With the cooler track temperatures this morning it just seemed to be working. The track temperatures picked up again for qualifying and it seems like we lost a little bit again. I missed out on Q3, I locked up on my second set of tires. There might have been a bit of lap time in there, but the first lap wasn't bad. It's still a good comeback from where we were yesterday. It might rain tomorrow, so anything can happen. If not, and it's dry, at least we've got a free choice of tires - so there are some positives."

Guenther Steiner: "Finishing sixth and 12th in qualifying, after a challenging period over the last few races, is pretty good. Unfortunately, Kevin (Magnussen) locked up on his last lap in Q2, so he didn't make it, but it was very tight between eighth and 13th - I think it was about two-hundredths of a second. But, starting 12th, that may be a different strategy. Romain (Grosjean) did a great job to be starting sixth. Now we have to see how the weather will be tomorrow, and how we get ready for rain, as that's what's being predicted as of now. It's been a good job from the whole team to get us back where we want to be."