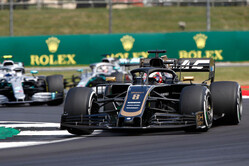 In a week which saw its controversial title sponsorship in jeopardy, having been accused of under-performing, the last thing Haas needed was a double DNF in one of the most prestigious events on the calendar.

However, that is exactly what happened.

As they jostled for position on the opening lap, Kevin Magnussen and Romain Grosjean collided, necessitating pits stops for both, which saw the Dane being lapped just two laps in the race, and both subsequently retiring due to damage incurred in the clash.

"The best that our drivers could bring to the battle was a shovel," he said, "to dig the hole we're in even deeper.

"It is not acceptable what happened," he continued. "I was pretty clear with them after Barcelona, what not to do.

"I'm obviously disappointed to say it, what happened. Everyone works hard to get out of this hole that we are in. We do the almost impossible and when we get the chance to score points or to at least learn something to move forward, they do something like this. I don't need any explanation for this.

"It's a wasted opportunity... there's your headline. I will do what I think is right to do in the next days."

Over the course of the weekend, the American team had been running Magnussen with its latest aero package, while his teammate had been running the aero-spec used at the season opener in Melbourne, a strategy the team plans to continue in Germany.

Though strong on one lap pace, hence some impressive qualifying performances, failure to work with its tyres has led to a massive drop-off in performance on race days however.

The double DNF not only sees the American team fail to improve on its current ninth position in the team standings, it also leaves it with the worst reliability record, having completed just 84.2% of the season's laps thus far, this being Magnussen's first DNF of the season and Grosjean's 5th.