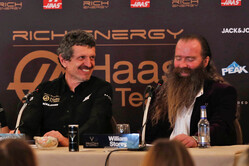 On the eve of the British Grand Prix weekend, the ever mysterious Rich Energy has taken to social media to announce that it has terminated its title sponsorship of the Haas F1 team.

"Today Rich Energy (@rich_energy) terminated our contract with Haas (@HaasF1Team) for poor performance," read the tweet. "We aim to beat Red Bull (@redbullracing) & being behind Williams (@WilliamsRacing) in Austria is unacceptable.

"The politics and PC attitude in @F1 is also inhibiting our business," the company added. "We wish the team well #F1 #richenergy"

The move comes at a time the ever controversial company - which "aims to beat Red Bull" but whose product is harder to find than hen's teeth or Lord Lucan - is in the London court after its logo was found to be a flagrant copy of that of a bike manufacturer.

Despite the findings of the court, via social media, Rich Energy has continued to dismiss the claim while rubbishing the challenger, Whyte Bikes.

In the most recent hearing, Rich Energy was asked to provide its accounts for inspection by the court, a move that many within the F1 and energy drinks anticipate with glee.

Haas has yet to react to the news, and one can be sure that the row will add further spice to the British Grand Prix weekend.

For what it's worth, Pitpass editor, Chris Balfe and Formula Money's, Chris Sylt, are both surprised the partnership with Haas got beyond the start of the European season, and not for anything to do with Haas' admittedly erratic performance.