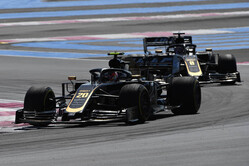 The eighth round of the 2019 FIA Formula One World Championship began with practice Friday at Circuit Paul Ricard in Le Castellet, France, as teams prepared for Sunday's French Grand Prix.

Rich Energy Haas F1 Team drivers Romain Grosjean and Kevin Magnussen ran exclusively on the Pirelli P Zero Red soft tire during FP1, Grosjean's session time significantly cut short as the team worked to remedy a water leak that developed during his first planned stint. Grosjean's best lap of 1:37.620 came on his ninth and ultimately last lap of his session, leaving him 20th on the timesheet. Magnussen's best lap of 1:35.410 came on his 14th of 19 laps, good for 15th overall.

Times improved in FP2 with Magnussen climbing into the top-10 with a lap of 1:32.789. It came on a set of softs, was 2.621 seconds better than his top FP1 lap, and put him 10th on the timesheet. Magnussen started and finished the session on Yellow mediums. Grosjean began the session on a new set of White hard tires but had to abort the run three laps into it after flat-spotting his tires on a brake lock-up. He resumed on a set of softs on which he set his best lap of 1:33.591.

Rich Energy Haas F1 Team ran a total of 85 laps - 49 by Magnussen and 36 by Grosjean - during the two sessions.

Romain Grosjean: "We didn't start with the best baseline set-up, I could feel that in the first run. We then had a water leak and that was the end of FP1. When you're not starting with a car that's bang on target, it just puts you a little on the backfoot, it was not ideal. Then in FP2, we had that front lock-up on the first attempt, that's not understandable at the moment. The tire was damaged, so we had to abort that run. I tried as hard as I could to carry on as I knew I only had one set left after that. We moved onto the soft, and by the end of the high-fuel run we were in a better place. It was a more positive end to the day."

Kevin Magnussen: "I think it's been a pretty good day. It was very hot on the track, so the tires were getting hot, but the car seemed to be working alright, on both low-fuel and high-fuel. So, that's encouraging, and we'll try to build on that, we'll try to learn why that is today and try and make sure it also works on Sunday. We're in the mix but it's the race pace we're really focusing on."

Guenther Steiner: "It's been a very challenging Friday for us, specifically with Romain (Grosjean) not doing many laps and Kevin (Magnussen) struggling to find a balance in the car. The afternoon went a little bit better, at least for Kevin. Not so for Romain as he flat-spotted his first set of tires immediately, then he waited until the track got better to go out on his second set. On Kevin's car, the guys worked on the set-up and balance - I think we're getting there. We still need to make quite a step tomorrow to be competitive over the weekend."