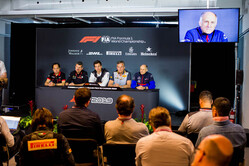 Guenther, last time you were in this press conference you talked about the need to unlock the potential of Pirelli's tyres. What solutions have you found in the last couple of races?
Guenther Steiner: We haven't found any! I think sometimes when you get the tyre to work it is working and sometimes it isn't. I think in Monte Carlo, with the family of the softer tyres, we got them to work, but we don't have a solution. If you ask me ‘what is your solution for the next race?' I don't know. Maybe we haven't got one. It's like we fall into it or not. We are working hard and for sure by going on and using the tyres you learn more and more but do we have a proper understanding of it, I would say, no.

What did you learn during FP1 this morning?
GS: Again, the track is very dirty. It seems like we can get the tyre up to temperature. I said ‘it seems', I didn't go conclusive here because FP2 will be a lot more relevant because the track will be cleaner and we can learn more. At the moment everything seems to be OK, so let's see what in the next hours is coming.

What can you tell us about Ferrari's upgraded power unit? You had it for the first time in Monaco, but what difference are you expecting it to make here in Montreal?
GS: I think the difference it should make here, because here the power is much more needed than in Monte Carlo. We had it in Monte Carlo just to see that everything works and for sure it helps there as well. But at the moment we are not running it; we are running it only tomorrow, so I cannot come to a conclusion here.

Tanabe-san, this is the first real power track of the season. How much are Honda looking forward to it?
Toyoharu Tanabe: It is a very good question and a bit difficult to answer for me. But anyway, I frequently told you that we are still in the position of catching up the top PU manufacturers, in terms of power and also the reliability. We are still developing for both. It means we know our position is a little bit down from these top competitors. But in terms of the performance since the first race of this year, our forecasts showed good performance on the track, so I'm looking forward to seeing tomorrow and then the race here.

What do you think is the gap to Mercedes no?
TT: I cannot tell you an exact number, but we will see the gap.

When can we expect the next Honda upgrade?
TT: Our development is ongoing and we are considering when we introduce the next step up. But we are observing the current situation on the PU, mileage and then damage, and we are discussing with the teams when is the best timing to introduce new, updated PU to the trackside. It's not only a Honda matter; we are closely working with the teams, for both Toro Rosso and Red Bull. At the moment I cannot tell exactly when but we are looking for a new, updated PU.

Thank you Tanabe-san, good luck this weekend. Toto, we're talking engine upgrades. You've got one here this weekend. Where is it better?
Toto Wolff: Well, we hope it's a tiny bit better than what we had before in terms of specification, but the biggest difference is just that it's a fresh unit. The other one has had quite some high mileage. With mature regulations it becomes more and more difficult to extract pure lap time performance out of the engines. You're trying to find a bit more reliability, maybe run a bit harder, longer, but you are not finding these kind of big jumps that we used to see in past years.

Where do you the balance of power this weekend, between yourselves and Mercedes in particular?
TW: If I would know! Guenther surprisingly summarized it well! The track is pretty dirty after FP1 so there is not really clear picture, people have been sliding all over the place. We were very competitive but you need to sceptical as to whether this is really the balance of performance. FP2 is going to give us more guidance.

We've got the same tyre compounds this weekend that we had in Monaco. What lessons have been learned from your Monaco strategy with Lewis Hamilton?
TW: Quite some lessons. We got it wrong in Monaco, in our assessment of how long the tyre would last, so that was an important step for us.

Thank you and good luck this weekend. Mario, talking about that strategy in Monaco, how surprised were you that the mediums lasted 66 laps?
Mario Isola: The problem was not related to the wear life of the tyre, more on the performance life. On a track where it's so difficult to overtake, like Monaco, Lewis was able to keep everybody else behind him - that's the point. The hard was working well. The best information for us was that all the three compounds in Monaco, that usually is a track where everybody is using just the two softest of the three chose, all three compounds were working well.

And what can you tell us about tyre wear this weekend?
MI: We need to wait until FP2 because it is a session where all the teams are collecting relevant data on tyres. We have some estimation. I believe it is not a surprise that everyone is targeting a one-stop race in Montreal because the wear in not high. It is a circuit where the rear degradation can make a difference, so saving the rear tyre is probably a target for everybody here. If we make a comparison to Baku rather than Monaco, because Monaco is a street circuit that is quite unique, we have tyres that are one step softer. The weather conditions expected are good, so they probably struggle a bit less with warm-up. I will talk to Guenther later in the afternoon to understand. But I can tell you, he was coming here with a jacket and outside it's 28 degrees so probably he has a problem with the temperature in general himself.

It's been a busy few weeks for Pirelli, looking ahead for 2020. You've been testing F1 tyres and F2 tyres. What can you tell us about those tests?
MI: Yeah, we made a plan with F2 where at the moment we have eight sessions already planned. Obviously we have to concentrate the development this year to be ready latest in December. If necessary we are also planning some back-up sessions in the Middle East at the end of the year. For F1 the plan is confirmed. We have three sessions, one in the middle of September at Paul Ricard with Renault, one at the beginning of November at Paul Ricard as well, with McLaren, and we are trying to find a solution with Mercedes for the last session, that will probably be in December. All dry sessions for the moment. We will start soon to make a plan for 2020, where we have 25 days of testing to distribute to the teams that are willing to test 18-inch tyres.

And how was the F2 18-inch tyre holding up in testing?
MI: We did just one shakedown in Mugello, but it was really a shakedown to understand the driveability of the car with an 18-inch tyre. Don't forget that the F2 car is without power steering, so the first target was to understand if they need to adapt the car, and if how to adapt the car with the new tyres. And we are going to test in Aragon in mid-June, so in one week's time.

Thanks. Franz, a double points finish for the team in Monaco, your first since Spain 2017. Just how pleased are you with progress at Toro Rosso this season?
Franz Tost: So far Toro Rosso has a competitive package together. We have a car that is fast, a car that works well from the mechanical side as well as the aerodynamic. And with Honda we have a very strong partner on the power unit side. We have two competitive, high-skilled drivers. Both of them are doing a really good job and the team is improving as well. The complete package, I must say, currently is quite good.

Tell us about the team, because Daniil Kvyat said yesterday in this press conference that the team has improved in many areas since he was last with Toro Rosso. What are those areas?
FT: We reshuffled our aerodynamic department. We changed a lot in the production to increase the quality. Also in the assembling we changed many working methods and processes and I think everything together came up with the result that the car is quite good.

And what about Kvyat himself? How much has he improved since he was last with you?
FT: Daniil is much more experienced now. He is much more mature. He understands the technical side much better. Last year, as well all know, he was working at Ferrari in the simulator. I think that he learned there also a lot and everything is coming together with him and therefore he is showing a good performance. But also I must say that Alex is coming up with a very good performance and I think he is a surprise and he also this morning was quite fast, because we must not forget that he is here the first time and he has to learn the track. It looks very easy from the outside but also Canada has some tricky corners, as we know, and he is making good progress. As I said before, we have two real competitive drivers. They have high natural speeds; they are quite good, talented.