Technical Insight: The suspension of an F1 car 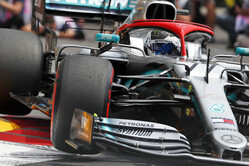 The suspension of an F1 car is a complex system of different elements and plays a crucial role in getting the set-up right.

The main purpose of the suspension is to connect a car to its wheels. This may sound relatively trivial; however, it does need a complex system of different components because moving a heavy object like a car at high speeds creates several challenges.

On a road car, the suspension has two main functions - ride and handling. Ride refers to the way the vehicle deals with changes in the surface of the road, how it copes with undulations, bumps, kerbs, potholes, changes in camber and the like. The suspension makes sure the car can handle uneven surfaces; it dissipates the energy that is generated when traveling over undulations and ensures that the grip is spread correctly between the four tyres. Handling on the other hand refers to the suspension's role when it comes to vehicle dynamics and describes how the car reacts to the input of the driver - so, for example, how it behaves under braking or how it changes direction.

F1 suspension has the same two functions, albeit that the parameters are different. Comfort, for example, is an important aspect of the ride quality in road cars; however, comfort is not exactly the main objective when designing and setting up an F1 car's suspension.

While ride and handling are functions of suspension systems on both F1 cars and road cars, there is a third purpose that's unique to Formula One cars - or, more precisely, to racing cars that rely heavily on aerodynamics to generate downforce. It's something which engineers refer to as platform control. The faster an F1 car goes, the more downforce it generates. When it's travelling at high speeds it can generate an amount of downforce that is several times its body weight. Therefore the suspension has to deal with tonnes of extra load when the car is going fast. This is not just a challenge in terms of the load the suspension must take, it is also a huge aerodynamic challenge.

For the aerodynamic concept to work, the position of the car relative to the track is extremely important - raise or lower the car a few millimetres and the airflow changes dramatically, making important aerodynamic parts like the floor and the diffuser less effective.

An F1 suspension therefore must ensure that the pitch and ride height of the car are well controlled so that the aerodynamic concept can work to its full potential, despite the changes in downforce at different speeds. This is what platform control is all about.

Hidden away underneath the bodywork of an F1 car are the inboard elements of the suspension - springs, dampers, rockers and the anti-roll bars. On the Mercedes W10 the springing is largely done pneumatically, so the car uses gas springs. The inboard suspension links to the elements that are in the airflow: wishbones, pull rods, push rods and track rods. Those elements connect to the outboard suspension, which is hidden away behind the wheels - the uprights, axles and bearings.

Mercedes builds its entire suspension system in-house. That way, it can ensure the high build quality that is needed and react relatively quickly to changes in design. The parts of the suspension that are hidden inside the chassis are primarily metallic, whereas the elements that are in the airflow are mostly made from carbon fibre, only their joints or flexures are usually metallic.

The outboard parts of the suspension are all made from metal; however, they sit inside the brake ducts which are made out of carbon fibre. While a suspension might seem like a relatively trivial object, the manufacturing process is quite complex. The costly materials and the high amount of labour that are needed to build it, make the suspension one of the most expensive elements of an F1 car.

A suspension must be able to take high loads. When an F1 car goes over a kerb at high speeds, the suspension needs to be strong and stiff to be able to handle those loads without incurring any damage.

Carbon fibre elements such as the push rods and pull rods, for example, are very strong in compression and tension and can take loads of ten Kilonewtons or more. At the same time, the suspension needs to be light - just like every other part on an F1 car.

Lastly, some suspension elements like the wishbones are out in the airflow, so those elements need to be relatively thin and skinny to reduce their aerodynamic penalty. To make things even more complicated, the wishbones must be big enough to house the tyre tethers - three for each wheel - which hold the upright and the tyre to the chassis in case of an accident. Finding the right balance between these three requirements - high strength, low weight, compactness - is a tricky balancing act and makes the design and manufacturing process of the suspension quite complicated.

Optimising the suspension for each circuit is an important part of the general set-up work for an F1 car. Through the suspension set-up, a team can minutely control the way the tyre is presented to the road and optimise handling and grip levels by changing parameters like toe (the angle of the wheels relative to each other) and camber (the angle of the wheels relative to the road). This kind of set-up work is largely done by changing the geometry of the suspension, so by changing metallic shims or by using suspension elements with different link lengths. The other area that the engineers will look at when working on the suspension set-up is platform control. In order to get the platform to work optimally, the team mostly focus on the spring rate and might change the gas pressure in the springs or replace metallic elements of different stiffness.

Another reason to introduce new suspension elements is upgrades to the car - either to the suspension itself or to its aerodynamic characteristics. Some components of the suspension like the wishbones or the steering arm are out in the airflow, so they have a big impact on the airflow around the car.

Finally, a team might introduce new suspension for a specific track. For the Monaco Grand Prix, for example, Mercedes brought special front suspension to make sure the car could handle the unique challenges of the streets of Monte Carlo.

Monaco features the tightest turn of the season, the famous Fairmont hairpin (aka Loews) which requires more steering lock than any other corner. Compared to the hairpin corner in the upcoming Canadian Grand Prix (Turn 10), an extra 40 percent of lock is needed for Loews hairpin. The turn is so tight that the regular suspension would limit the choice of driving line through the hairpin or that the drivers would have to turn the steering wheel multiple times. The special front suspension Mercedes brought to Monaco allowed for a bigger road wheel angle, so that the drivers could attack the hairpin in the way they wanted.