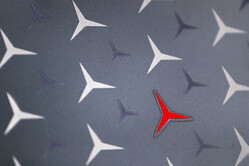 In the wake of Niki Lauda's passing earlier this week, most of the teams and a number of drivers have sported tributes to the three-time world champion.

Naturally, the team of which he was non-executive chairman, Mercedes, has sported some of the most poignant.

While team members wear black armbands and the cars sport a facsimile of his signature as well as a red halo, one of the stars that adorn the engine cover of the W10 is red.

Speaking ahead of today's race, which will feature a minute's silence as part of the sport's tribute to the Austrian, Wolff has revealed that the red star is to become a permanent fixture.

"We have done a few things," he said. "I'm really happy how we started off this weekend with the red halo, and the little star - which is going to stay on the car forever - and the signature. It was nicely done.

"Beyond that, unless we find something which we really believe is worth Niki Lauda, then this is what we're doing," he added.

As part of the pre-race tribute fans at the track have been asked to wear something red, while all 20 drivers will sport red Lauda-style caps.