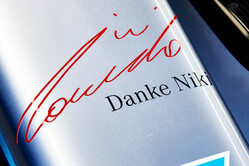 Speaking days after Niki Lauda's death, Toto Wolff admits that the Austrian's passing has left him "like a zombie".

"My emotions are so overwhelming as a friend," Wolff told reporters. "The last 48 hours were terrible, I feel like a zombie. I keep looking at the pictures and find myself with tears in the eyes every half an hour, because he's not there anymore.

Speaking of the events earlier in the week, he admitted: "We knew that it was not going well, that it was probably a matter of days. I got a text message from his wife on the Monday evening. I was in Paris.

"Since then, I'm not myself. It feels surreal to be in an F1 paddock with Niki not alive anymore. Although we could see it coming, when it happens, it's so raw that you're not going to see him anymore."

Having undergone a lung transplant last summer, Lauda was readmitted to hospital for a couple of days in January, having contracted Influenza over the Christmas holidays.

In the wake of criticism of Lewis Hamilton for cancelling his media engagements yesterday, Wolff said: "We both got the message at the same time and spoke to each other right afterwards, and these last days. Everyone has his own personal way of mourning and feeling the sadness.

"It is impossible for us to comment and be reminded about the sad situation," he said, referring to the team's decision to cancel its media engagements yesterday, instead opting to face the media today.

"Hopefully then you will accept that we can carry on with our racing," said the Austrian. "There is nothing else that Niki would have wanted us to do."