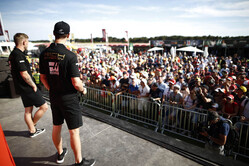 Rich Energy Haas F1 Team drivers Kevin Magnussen and Romain Grosjean qualified 15th and 17th, respectively, for Sunday's French Grand Prix, the eighth round of the FIA Formula One World Championship at Circuit Paul Ricard in Le Castellet, France. Grosjean will start Sunday's race from 16th as Daniil Kvyat of Toro Rosso moved to the back of the grid after a power unit change.

Magnussen executed a relatively clean Q1 session and laid down a lap of 1:31.166 around the 5.842-kilometer (3.630-mile), 15-turn circuit to take the 12th spot on the timesheet, advancing him to Q2 along with the rest of the top-15. Grosjean encountered traffic issues while attempting to lay down his best lap of the session and had to settle for the 17th-quick time of 1:31.626.

Q2 proved to be more challenging with traffic for Magnussen, whose best lap of 1:31.440 claimed the 15th position on the grid. Only the top-10 drivers advance to Q3.

Romain Grosjean: "It's been a tough weekend up to now. The car's been difficult to drive - in terms of balance, and we didn't do much yesterday, so we were always going to start on the backfoot today. We made some progress, but on the other hand we struggled with some other things. It's difficult to pin-point, sometimes it's front-end, sometimes it's rear-end. It just wasn't good enough. We just need to analyze everything, get our heads down, and move forward."

Kevin Magnussen: "Qualifying is normally our strong point this season but this hasn't been the case today. We've lacked pace over one lap. As it's been all year, it's very disappointing to have a car that we know has good downforce, a well-designed car that should be working, but just isn't because we can't make the tires work. We should be able to do better than qualify P15 and P17 with the car we have. It's confusing but I'm hoping for a good race tomorrow. We'll give it everything."

Guenther Steiner: "Obviously a disappointing day. We came here thinking we could get the tires to work - we didn't. This is the result. We've got some work to do, but let's see what tomorrow brings. It'll be difficult to get into the points, but we'll of course try for it. We have a free tire choice, so that's to our advantage. You never give up - we'll keep on digging away."