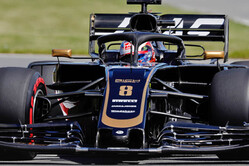 Haas team boss, Guenther Steiner has issued a brief "no comment" in reaction to title sponsor Rich Energy's claim that it has ended its partnership with the American team.

"Rich Energy is currently the title partner of Haas F1 Team," tweeted the team this morning. "I cannot comment further on the contractual relationship between our two parties due to commercial confidentiality." - Guenther Steiner, Team Principal.

Late yesterday afternoon, the ever controversial twitter account for Rich Energy claimed that the company had ended the partnership with Haas based on its poor performance in Austria, the mysterious energy drink manufacturer claiming that it was unhappy that the Haas team finished behind Williams.

Leaving aside the fact that both Haas drivers qualified well in Austria but subsequently suffered the ongoing tyres issues that are compromising the team, Williams has its own axe to grind with Rich Energy, but that's a story for another day.

As well as criticising Haas, Rich Energy also took a pop at the FIA and F1 itself, claiming that the "PC attitude in F1" is "inhibiting" its business.

Rich Energy's decision to drop Haas comes at a time the mysterious energy drink is embroiled in a legal row over its logo, a legal row it has lost but refuses to accept the court’s ruling.

A part of the latest court activity, the company was asked to make its accounts available to the court, a move that will not have been well received when one considers that more people appear to have walked on the moon than have seen a can of Rich Energy on sale.