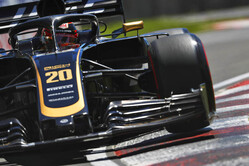 As if Guenther Steiner doesn't have enough to worry about, what with his team's ongoing issues with anything that involves running more than one lap at a competitive speed, the Italian now has to worry about his title sponsor.

Following last night's tweet from Rich Energy that claimed the company had ended its partnership with Haas, citing its poor performance and increasing Political Correctness within the sport (!?!), Steiner this morning issued a brief statement, again on social media, basically claiming that this was news to him.

Since then, some sections of the media have claimed that a number of investors in Rich Energy are attempting to save the partnership with Hass.

In a follow-up to his original comment, Steiner insists that the Rich Energy logos will remain on the Haas cars for the British Grand Prix weekend.

"I would like to tell you more, I hope you respect that," said the Italian. "I don't want to put anyone in a difficult situation but I can't say anything about it.

"They will be on the car this weekend," he said of the logos, "and the rest, we will sort out as we go forward. The commercial agreement doesn't let me talk any more about it.

"It's part of the job," he said of the situation with Rich Energy. "We can do without it but it's not like I'm staying up at night thinking about it. We get on with our job and it's more important to get the job back to where we want to be. That is our focus. We all have parts of our jobs that we enjoy more and enjoy less. It doesn't upset me, it's just something that we have to deal with, and I will next week."

That said, extremely well-placed sources told us several weeks ago that there was an issue and that it concerned certain investors in Rich Energy. Indeed, we were told that one 'investor' was seeking funding in a bid to buy out some of their co-investors.

And if we told you who had been approached for this funding you wouldn’t believe us… we could barely believe it ourselves.

It's a strange, almost unbelievable tale, which in recent weeks has featured a few additional twists, yet still in keeping with the enigma that is Rich Energy.