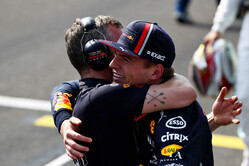 While not, in any way, wishing to tempting fate, one has to admit that this weekend is shaping up to be pretty, pretty, pretty good, as Mr David would say.

Due to the fact that yesterday's sessions were pretty much useless due to the fact that the weather conditions were different to what is expected this afternoon and tomorrow, not to mention the strengths and weaknesses of the various cars in different sectors, this morning we saw Messrs Hamilton, Verstappen and Vettel separated by just 0.082s.

Bottas and Leclerc were both around 0.3s behind, while Gasly has Norris breathing down his neck.

How close exactly do you want it?

After yesterday's rain, this morning it was cement dust, and barring a plague of frogs or a defrocked priest this afternoon should see a straightforward shoot-out for pole.

As we know from experience, overtaking here is difficult, very much a case of fortune favouring the brave, consequently a good grid position is vital. Even more so, when you consider that tomorrow's race is surely going to feature on the minds of team bosses as they head into the summer break and began mulling their line-ups for next season.

Ahead of Q1, the air temperature is 24.1 degrees C, while the track temperature is 42.1 degrees. Race Control claims there is a 60% chance of rain, though they said that before FP3 and all the drivers had to deal with was cement dust.

The lights go green and Stroll is first out, followed by Russell and Kubica, the Pole appearance sparking a roar from the crowd, many thousands of his countrymen have made the journey here this weekend to support their man.

Stroll gets things underway with an 18.688, which Russell surprisingly beats with a 18.143. Kubica posts 18.843, but still his fans cheer their hearts out.

A 15.817 sees Verstappen go quickest, and suddenly things are getting serious, the Dutchman a full half-second quicker than his nearest rival (Leclerc).

With 8 minutes remaining, all bar Perez and Ricciardo have posted time.

A spin in the final corner sees Leclerc spin and clout the barriers with his rear end.

First appearances suggest it is only the driver's pride that has been damaged.

Replay shows the Ferrari driver was lucky not to collect Russell as he rejoined the track.

A 17.460 for Russell, which puts him 14th, shows that the track is evolving, which could be bad news for Leclerc.

Norris goes sixth, and Raikkonen ninth, as Albon slips into the drop zone.

Lots of green as the foot of the sheet as plenty of PBs are posted.

Ricciardo fails to improve and misses the cut, while teammate Hulkenberg improves to 12th.

Replay reveals that Ricciardo was caught in a massive queue before his flying lap and eventually gave up, the Australian seemingly in a little fracas with Perez.

Great performance from Russell, who misses the cut but finishes 16th.

Quickest is Verstappen, ahead of Hamilton, Bottas, Magnussen, Leclerc, Vettel, Sainz, Raikkonen, Norris and Gasly. That's both Racing Points out despite the much anticipated upgrade

Hamilton is first out for Q2, as work continues on Leclerc's car. Bottas heads out also, like his teammate he is on mediums.

The Ferraris head out on mediums, as do the Bulls.

Bottas sets the benchmark with a 15.669, but moments later Hamilton raises it a little higher, crossing the line at 15.548.

A 16.565 sees Hulkenberg go seventh, ahead of Sainz and Albon.

"Why is he driving so slow," asks Verstappen of Bottas. The team tell the youngster to ignore the Finn, failing to add the words... "he's not worth it".

With just over three minutes remaining, Norris gets the final assault underway.

Giovinazzi is under investigation for impeding Stroll in Q1.

A close one in the pitlane as Hamilton is lucky not to hit the rear of Magnussen's Haas.

A mistake sees Norris run wide in T4, he aborts the lap and looks to try again.

Verstappen is on softs, as are the Mercedes pair and Gasly.

Vettel fails to improve, while Verstappen backs off in S3.

Hulkenberg fails to improve, as do the Toro Rosso pair.

While the Ferraris were off the pace in Q2, like Mercedes, Leclerc and Vettel can go full Nigel Tufnell in Q3, cranking it up all the way to 11.