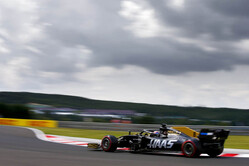 Rich Energy Haas F1 Team drivers Romain Grosjean and Kevin Magnussen qualified ninth and 15th, respectively, for Sunday's Hungarian Grand Prix, the 12th round of the FIA Formula One World Championship at Hungaroring in Budapest. Magnussen will start the race from 14th after 14th-place qualifier Antonio Giovinazzi of Alfa Romeo was penalized three grid positions for impeding during Q1.

The Haas F1 Team duo, utilizing dual aero specs on their respective Haas VF-19 racecars for the third consecutive race weekend, both successfully advanced to Q2 as part of the top-15 for the second weekend in a row. Both did it during the closing laps of the session, Magnussen's lap of 1:16.122 around the 4.381-kilometer (2.722-mile), 14-turn circuit the fourth-best of the session and Grosjean's 1:16.978 good for 15th spot on the timesheet.

Grosjean laid down his best lap of the weekend and the ninth-best lap of Q3 with a 1:16.013. It gives him his best grid position at Hungaroring since he started third and second in 2012 and 2013, respectively.

Romain Grosjean: "The old girl made it into Q3, she was limping a little at the beginning, but eventually she got there. It's been a tough weekend to be fair on her. We're running the same downforce we had in Hockenheim, just because that's the maximum we've got. Here, obviously, it's not enough – it's tricky. Q1 was very difficult, Q2 things got a bit better, then Q3 we really extracted the maximum we had. I'm worried for the race, we're missing a lot of downforce to get the tire to stay alive for a long time. It's a track where it's difficult to overtake, so I'll get my elbows out and see where we can finish tomorrow."

Kevin Magnussen: "We were P4 in Q1, then P15 in Q2. I don't know what it is, but this car is swinging so much, up and down. The window is so small, even in qualifying – we saw that in Austria. I was struggling to get out of Q1, I got through just about, same thing again in Q2. Then in Q3 I was fifth. The car can go in and out of its window even in one session. It's very difficult at the moment. It worked perfectly for Q1, then for Q2 there was no grip. There was some traffic on my out lap, but that shouldn't be such a big deal to affect our tire window. We're really just trying to learn and analyze from these sessions, but it's tough. So, I start 15th tomorrow on a track that's very difficult to overtake."

Guenther Steiner: "Not a bad qualifying. I think we showed again we can get good laps in. Unfortunately for Kevin (Magnussen), his fastest laps in Q2 were compromised with some tail winds, so he didn't make it into Q3. Romain (Grosjean) qualified solidly in ninth. For how we're struggling, we actually did pretty good."