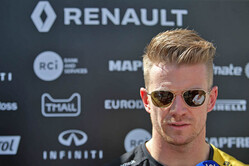 Like Alexander Albon at Red Bull and Daniil Kvyat at Toro Rosso, both Renault drivers, Daniel Ricciardo and Nico Hulkenberg, are set to take grid penalties this weekend.

Renault has opted to introduce its latest upgrade and as a result, both having already exceeded the permitted allocation, both drivers will be demoted at least 5 places as they take on a new internal combustion engine (ICE).

Renault has offered the upgrade to customer team McLaren also, but the Woking outfit is unsure whether it will use it or keep it for Monza.

Honda and Mercedes are also introducing upgrades this weekend. However, only Albon and Kvyat will use them - hence the penalties - while Lance Stroll is the only Mercedes-powered driver who will incur a penalty for taking on a new German unit, the Racing Point driver falling out of sequence following his engine failure in Canada.