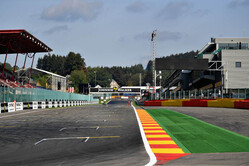 There have been no changes of any significance to the Spa-Francorchamps circuit since last year.

Pirelli brings the hardest tyres in its range - the C3, C2 and C1 - to Spa this weekend, a combination previously seen in Bahrain, Spain and Britain.
l
Known for its varying elevations and the extreme demands it places on tyres, thanks to famous sections such as the Eau Rouge and Raidillon complex, at Spa drivers experience a wide range of g forces in a short space of time.

At just over seven kilometres, it is the longest track on the F1 calendar - hence the race distance is scheduled for only 44 laps.

Spa is also well-known for its changeable weather, and the length of the lap means that it can be raining on one section of the track while staying completely dry in another. If it rains, areas of standing water can easily form, due to the drainage characteristics of the track.

Most drivers list Spa as one of their favourite circuits, because of the challenge and sensations that it provides them with. Exactly the same is true for the tyres, which are subjected to high forces from all directions: lateral, longitudinal, and vertical.

Last year the medium, soft and supersoft tyres were nominated. This year's nomination for Belgium is generally harder and more widely spaced, with the C1 and C2 a little softer than their 2018 hard and medium equivalents and the C3 close to last year's soft.

Last year, most drivers chose a supersoft-soft one-stopper (with the notable exception of Valtteri Bottas, who finished fourth with a two-stopper). The race, which was dry after a wet qualifying, was affected by an early safety car - and only two drivers used the hardest compound available.

Mercedes (along with the McLaren of Lando Norris) is the team that has chosen the least number of soft tyres for Spa, taking two more medium sets compared to Ferrari and Red Bull.

A three-time winner here, besides being favourite to win a fourth Belgian Grand Prix, and thereby extend his championship lead, Lewis Hamilton is, understandably, the contender with the best odds to win the 2019 drivers' championship. Should he go ahead and win this weekend's race, there's no doubt his odds will improve accordingly.

With his wins in Austria and Hungary, Max Verstappen is now second favourite to win the title, ahead of Valtteri Bottas, Sebastian Vettel and Charles Leclerc.

From a power unit perspective, Spa is the hardest circuit of the year. Over 67% of the 7km track is spent flat out, which translates as around 73s per lap, the longest accumulative wide open throttle time of the year. The first period of sustained throttle is the climb from the La Source hairpin to the chicane at Les Combes. It takes around 25s (1,852m) with the driver flat on the throttle throughout. The distance is only slighter shorter than a runway at Charles de Gaulle airport.

The track drops over 40m from La Source before climbing over 80m back to Les Combes, equivalent to a gradient of 1 in 4, or one of the steepest mountain climbs in the Tour de France. The descent compresses the internals but going over the crest of the hill, the vertical force is suddenly lifted and the parts unloaded, with the vertical forces switching to -3g. It can be equated to the feeling on a rollercoaster drop when your body feels compressed and pushed down into the seat but weightless when you go over a bump.

The turbo will be rotating at close to its maximum to keep pace with the high rotational speeds of the ICE. The altitude will further increase rpm. At its most extreme the turbo will be spinning at more than 95,000rpm or over 1,500 revs per second!

Spa is one of the most demanding tracks on the MGU-K. Each of the braking points comes after a long burst of power so the energy dissipated through the brakes is enormous. The best opportunity for the MGU-K to recover energy is the Bus Stop chicane, which the driver approaches at well over 300kph and brakes down to just 75kph.

High-speed flowing corners such as Pouhon and Fagnes are the best opportunities for the MGU-H to recover energy. It will feed this energy to the MGU-K and ICE on the next period of throttle through Blanchimont.