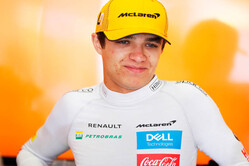 Spa-Francorchamps is one of the most revered and historic racetracks in the world. It featured on the inaugural Formula 1 calendar in 1950 and it was the scene of McLaren's first World Championship F1 victory in 1968.

Carlos Sainz: "It's been good to take a break over the summer and to see family and friends after a busy first half of the year. Everyone in the team deserved some time off. With batteries recharged, it's time to go back racing! The ambition is to keep up the good results and fight for the highest spot possible in both Championships. There are still many races to come this season and I'm sure we'll enjoy some good battles in the midfield."

"Belgium is an incredible track and one of my favourites on the F1 calendar. I enjoy everything about this weekend. The unique layout of the track, Eau Rouge, Radillion, the atmosphere with the fans... it just makes the weekend one of the most special of the year and we are ready for it!"

Lando Norris: "I'm really excited to get back in the car again. It was nice to take some time out and recharge, but I'm ready to go again. I'll be working flat-out for the rest of the season, getting prepared for the races ahead with my engineers and making sure I'm on top of the fly-aways to come at tracks that I've never raced on.

"I've driven at Spa quite a few times though, including in FP1 last year. I also made it to the podium in F2 last year as well. I'll be ready to hit the ground running and start pushing from my first lap. It's an awesome track, definitely one of my favourites, and I can't wait to go racing there again this year."

Andreas Seidl, Team Principal: "The summer break has been a good opportunity for the team to relax and spend time with family and friends, but now we're focussed and ready to go racing again. We now look to keep our momentum going into the second half of the season. As always, we must focus on ensuring our race operations are as good as they can be, that includes strategy, pit-stops and reliability.

"The midfield battle will continue to be tight until the end of the season, so it's crucial that we keep giving our drivers the best chance at scoring points each weekend. We want to consolidate our current position and maintain our positive trend. Much of the midfield battle will be decided back at the factory, as well as on the track, and Carlos and Lando have done a fantastic job so far. We now look to keep moving forward together as a team. This fight will continue right up to the end of the season."