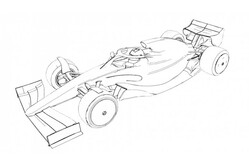 We've heard the spending limit, we've seen the tenders for common parts, we've seen the artist's impressions of the cars, but with little over two months before the October deadline, the 2021 rules package has yet to be agreed and rubber-stamped.

To put things in perspective, not forgetting that the deadline has already been extended, as the teams head off on a mandatory two week shut-down, fundamental issues such as refuelling and the weight of the cars are still being discussed.

Indeed, Ferrari boss, Mattia Binotto questions, based on recent races, whether some of the more fundamental changes are even necessary.

"I pushed very hard to get the rule process to be moved from end of June to what's now the end of October," said Christian Horner, "because I think if we would have had regulations just introduced we would have been in a real mess.

"I think the key thing now is how we use that time during the next three months to ensure that the regulations that we do end up with on October 31, that we focus on the right things.

"There is a series of collective meetings that between now and the decision point where we really need to get into the detail of what is the objective of the change and does the change of regulation achieve those objectives, from a show point of view, from a cost point of view.

"I think we really have to drill into detail over the next few meetings to ensure that with what is presented on October 31 there is a sensible theme to."

"There is very little time now from until the end of October, and certainly there is quite a long list of open items, open subjects," said Mattia Binotto. "But more important, I think, is that the discussions ongoing. I think it would be a lot worse if no discussion would take place and somebody is deciding for everybody. So the fact that we have got discussion is certainly what's positive and it's in our hands to make sure that we properly collaborate with F1 and the FIA and the teams to address the main points for 2021.

"As I often indicated I think, we have certainly got common goals and common objectives for 2021," he continued, "sustainability is a key factor, but I think we need as well to pay attention not to overreact in terms of technical, because do we need a better show?

"I think if you look at the last races, certainly we may still have a good show in certain conditions, but certainly these conditions need to be identified and pursued, so I think changing the car, changing the technical means, spending, re-engineering, proof of concepts, so whatever we may choose, we need to choose it because we are fully all convinced that it is going in the right direction.

"Yeah, there is very little time and it's a lot to discuss, but it's good that we are still discussing."

"From our point of view we see it clearly it different," argued Andreas Seidl. "I think it's about time now to simply stop discussing.

"We all have downloaded our input," he added. "We do this since two years, all teams. I think FIA, Formula 1 has a clear idea of what they want to put in place, they presented that also to you guys two weeks ago. We simply want to see action now and we can move on."

"The regulations were delayed a little bit but I don't think they were in the right place in order to sign them off anyway back in June," added Claire Williams. "It gives us a bit more time to debate.

"My bigger concern is not that we won't get it done," she admitted, "it's more about what's going to change between June and October.

"We had some foundation principles in place and we fundamentally agreed with those at Williams and I'd like to see those stuck to as best as possible between now and then, but I think it's par for the course this process in Formula 1 and we have to have those regs signed in October, whatever they will be, so we've got to do a good enough job between now and then to make sure they are the best they can be."

While the dithering, and indeed the questioning of the need for some of the changes may concern fans, the stock market is already expressing its concern over the future of the sport, with £385m ($470m) wiped off the value of the sport yesterday due to forecasts that earnings are set to decline again.