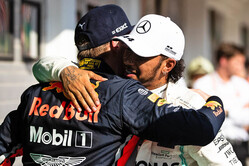 Though the Hungarian Grand Prix didn't feature the thrills and spills of last week's race at Hockenheim, the race long game of cat and mouse featuring Max Verstappen and Lewis Hamilton surely ranks as one of the greatest duels in the history of the sport.

When all seemed lost, Mercedes, having initially ruled out a two stop strategy, changed tactics and pitted the Briton for mediums, while his rival continued on hards.

As he left the pits, on lap 49, he was 20s down on the race leader, with just 20 laps remaining, and still doubting the wisdom of the stop.

Echoing the remorselessness of Michael Schumacher, Hamilton reeled in his Dutch rival whose worn hards were no match for the medium shod Mercedes.

Having failed to react to Hamilton's stop the end result was inevitable, and moments after being passed by the Briton on lap 67, Verstappen pitted for softs and a shot at fastest lap.

Speaking after the race, Hamilton was as thrilled with his battle with Verstappen as the rest of us.

"There is really no better feeling from a racing drivers' point of view," he told reporters. "When you have a race like today and you face a really strong competitor and a great driver like Max, who is obviously at his best and continuing to perform great, it's really comforting. It's awesome. I really am happy.

"You want to be proud of yourself and I feel really proud of myself today," he added, "how I drove, because that's how I always want to drive, and how we delivered as a team.

"I'm 34 years old but I feel like I'm driving better than ever," he grinned.

"It's awesome to see the respect level between us," he said of Verstappen, "it was really respectful driving out there.

"As soon as I got into second I was like, 'OK, this whole battle they've been talking about me and Max having, we're going to have that today'. He put the car in some good places, I gave him space and more today but that's mainly from a mind-set, if we were fighting on the same points it may have been a lot more aggressive.

"But there was no need for that today and it was really just making sure that when we do finally pull off an overtaking manoeuvre that was clean."

As he heads into the summer break with a 69 point lead over the Dutchman, Hamilton is taking nothing for granted, aware that Red Bull and Honda have taken great strides forward in recent races.

"All of a sudden we've had this big step up from Red Bull, now we've got a really good battle on our hands," he smiled, "and it looks like it's here to stay."