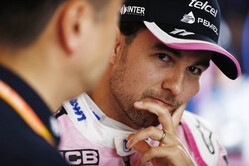 Lance: "I'm feeling ready to get back to racing after the holidays. It's been a long time since Budapest and I'm really looking forward to the second half of the season. I think we can be stronger in the coming races and there are more new parts coming through. We definitely won't stop pushing because there are nine races to go and lots of opportunities to score good points.

"Spa has never been my absolute favourite circuit - which is quite unusual because I know most drivers love racing there. It's obviously a legendary track with some special corners and it's very high-speed. Eau Rouge is the corner everybody talks about, but it's a flat-out corner these days so you just need to be very precise to carry as much speed through it as possible. Getting a clean exit out of turn one is also really important because you're on full throttle all the way up the hill to turn five.

"The famous Spa weather also adds some drama because you know there's always a big chance of rain at some point over the race weekend. The lap is really long too so even if it's wet in one part of the lap, it can be dry at the far end of the track.

"It's another home race for me because my mother is from Belgium so in that sense it's a bit more special for me. I'd love to kick off the second part of the year with a strong result."

Sergio: "I definitely enjoyed my summer holiday. I went home to Mexico and spent time with my family - relaxing near the beach and having some lazy days. The racing season is so busy and it's important to take time out to catch your breath and recharge the batteries. I'm feeling in good shape as we get back to business.

"I always say that Spa is the perfect place to restart the season because it's such a special track. It's one of the best races of the year and I love the high-speed corners such as Pouhon. It's a long lap, too, so when you hook everything up it's very satisfying.

"Spa usually produces good racing, as well. The first sector and the approach to Les Combes offer good opportunities to overtake. I still remember the first lap last year when we were fighting for the lead. It was such a special feeling to get a good result. I hope we can do something similar this year.

"The key to being quick is to find the right trade-off between top speed and downforce. You want to be quick through the corners without losing too much top speed down the straights. We are on full throttle for about 70% of the lap so you don't want too much drag."

Otmar Szafnauer: "We come back from the summer break determined to build on the foundations we have laid in recent months. The new aero philosophy will continue to evolve over the next few races and we believe it's taking us in a better direction. I think we can be much stronger in this second half of the season and challenge for points at all the upcoming races."