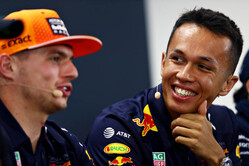 Q: Alex, many congratulations, new colours for you this weekend. How much of as surprise was it for you to get the call up for this weekend?
Alex Albon: Yeah, definitely. Starting the summer break, I came into it expecting a relaxing time and then the first day of the summer break I got told the news. I had a lot of time to think about it. Obviously in F1 with the summer break you can't really speak to anyone, so there was a lot of time there where I was like: "OK, who do I speak to? What can I do?" The first time really speaking to everyone was really on Monday. I'm kind of catching up right now, trying to know all the team and that's about it.

Q: So what are the objectives for this weekend at Spa?
AA: Just see how the weekend goes. We're starting at the back anyway. Just take it step-by-step. Obviously it's a new environment around, so just trying to understand really how the team works, how the car works and just to listen to Max as well, just to see how he interacts with the team and kind of learn from that. Yeah, we'll take it step-by-step.

Q: And on a scale of 1-10 how excited are you?
AA: I'd say it's a 10 for excitement, but then the numbers for nerves are quite high as well!

Q: Good luck, thank you Alex. Max, what was your reaction when you heard Alex was going to be your team mate?
Max Verstappen: Well I knew before. They told me when I was on the simulator before holidays so for me it was not a surprise. I mean, yeah, I've been there before myself.

Q: And are you looking forward to having him as a team mate? What do you think you can achieve together?
MV: I guess time will tell isn't it. It's a bit difficult for me to answer that. Alex is a great guy. I know him already for a long time. A bit like Pierre, we raced against each other, all together in 2010. Yeah, he's a fast guy and as you can hear he's very excited and that's always good.

Q: Max, the car was very competitive before the summer break. What are your expectations here at Spa?
MV: I don't know. I think in general it will be a bit tougher for us because of the long straights, but even in Silverstone, for example, we were still competitive, so we just needs to find a good balance in the car. Of course, around here Sectors 1 and 3 are pretty much flat out and in Sector 2 there are a lot of corners, so you have to find the right compromise there.

Q: OK, good luck with that. Thank you, Max. Checo, a lot of talk about contracts coming into this weekend. What news about your whereabouts for 2020?
Sergio Perez: Yeah, I've seen the news. It was a busy day in that regard. I am confident and I hope that soon we can announce it and just can get on with it.

Q: Announce with Racing Point?
SP: Well, what my plans are. I think I am very close to finding out what I am going to do for next year, so it shouldn't be long before I know.

Q: OK. Turning to this weekend, the car wasn't so competitive last time out, can we expect more from you here because the team certainly has a good record at Spa-Francorchamps?
SP: Yeah. No, definitely. It's a good place for us. We've been strong in the past so I see no reason why we cannot be strong this weekend. The margins in the midfield are very small, so a little improvement it can put us back in contention to be the fourth fastest here. We are aiming to finish the season on a high. It has been a struggle all the way up to now but margins are small, we are improving, so hopefully we can finish the season with the fourth fastest car.

Q: OK, good luck with that. Thanks Checo. George, I've asked almost everybody else about 2020, so I'm going to ask you. What are you plans?
George Russell: Hopefully in Formula One, I guess. No, I'll be racing with Williams next year. When I signed the deal it was a multi-year deal with Williams, so I guess it's just waiting to formally announce everything.

Q: OK. It was a very solid performance from you in Hungary last time out. What can we expect from you here? Do you think you can maintain that momentum?
GR: I think in Hungary we optimized everything to the absolute maximum. I think a few drivers didn't - there was obviously the incident with Daniel and Sergio in qualifying, which probably helped us a little bit. I think this circuit, and also Monza next week, will really not suit our car. Unfortunately we don't have much downforce but we also have a hell of a lot of drag, so we're going to struggle on these long straights. But the season has been full of surprises and we'll see what we can do.

Q: OK, thanks for that. Valtteri, some very positive news for you this morning. You're staying with Mercedes for another year. When were you told and please give us your reaction?
Valtteri Bottas: Yeah, thank you, for sure that's always good news when you get things confirmed for next year and it's definitely all that I wanted, because I believe the team will be strong for sure for the rest of the year but also next year. I see no reasons why it wouldn't. So obviously that made me very happy to hear it and to get it all done finally. I think it was last weekend that we signed and the paperwork was done. So we had to wait a bit until then, but I still had a good break and lots of fun and everything, but I'm happy now.

Q: Looking ahead to this weekend. Ferrari won at Spa last year. Who are favourites coming into this weekend?
VB: I think Ferrari can be really good here, as we've seen with the straight-line performance. There are super long straights here. And Red Bull have been improving at all kind of tracks. It's not going to be an easy weekend for us, for sure. We are not standing still. We have some new parts on the car. I think also power unit. So it should be quite interesting to see how the car feels again here and how is the engine.

Q: (Livio Oricchio - liviooricchio.com) Max, all drivers says the first competition is on your side, your team mate. Do you believe it will be more difficult for you, the next of the season, with Albon?
MV: It's a bit difficult to say at the moment. I rate Alex very high, but I also rated Pierre very high, so we'll find out.

Q: (Heikki Kulta - Turun Sanomat) Valtteri, how was your birthday party and was it like a double celebration because of your new contract as well?
VB: Thanks, yeah, I turned 30 yesterday actually. I didn't have a party yesterday but the day before I had. It was a good one, with some good people around. Obviously, 30 it happens only once in a lifetime, so... There is always a good excuse to throw a party, but that's a good excuse. It was good. I enjoyed it. Was there another part to the question?

Q: (Heikki Kulta - Turun Sanomat) Was it a double celebration because of the contract?
VB: Well, yeah, for sure. I knew by then. Everything was done by then, so it was actually nice to celebrate with the closest people. Another good excuse.

Q: (Jerome Pugmire - Associated Press) Question for Valtteri. After the last two races, what happened in Hockenheim and then in Budapest, did that add to the stress of waiting for the decision - or were you still confident you would get another contract?
VB: To be honest, going to the summer break, and in this sport you know once you've not signed, anything can happen in this sport and obviously always what comes, the driver decisions by the teams, there's many different things that the teams look at and what kind of things make the difference between the choices, and obviously it was very openly spoken, the whole situation between me and Esteban and yeah, so I had to wait until last weekend. For sure it was... thinking about it and other options just in case, because obviously you never, in this sport, want to be left between two chairs. So for sure I was trying to make a plan for something else but then things started to go the right way and I saw that it's just better to commit to this as it is, and it makes me, like I said, very happy to know about the future and don't need to worry about that now. I can just really focus on the job. Unlike the last couple of races I really want to have a strong result here and a really strong end of the year.

Q: (Phil Duncan - PA) Alex, can you just explain a little about how you found out that you were going to be driving for Red Bull for this part of the season? And also, do you think that you've got the tools to be able to take the challenge to Max at Red Bull?
AA: Yeah, sure. So, it was just a normal thing, a daily catch-up with Dr Marko in his office in Austria. Pretty much that's how the conversation went. I think it was the Monday at the beginning of the summer break. That conversation went through and it was one of those things: "oh, by the way, this is what's going on". And that was pretty much it. I think you guys knew only an hour after I did, so it was quite close, in that sense. But yeah, it was all OK. Regarding Max, yes, on my side it's really just focusing on myself. I'm not looking too much at Max at the minute. I'm know I'm coming in quite inexperienced. I know that; I think the team know that as well. So, it will just be about step-by-step; start from the beginning, know my team, know how everyone works and understand the car and then we'll see. Treat every weekend race-by-race really and if we start picking up results towards the end, that's obviously great - but that's not really the focus at the minute.

Q: Alex, team mates now but when did you first race Max?
AA: 2010, wasn't it? We did the European and World Championships together. We had a few crashes together, do you remember?

AA: We had a good rivalry going. Max was the young guy, I was the experienced one - which is a bit weird. I mean, I'm older than Max but he's a bit more experienced than me in F1. So, yeah, we started like that. We had some good races.