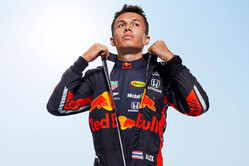 With Red Bull announcing its driver swap on the first day of the official F1 break, other than the basics neither the Austrian team or its Italian sibling outfit was giving much away, certainly in terms of comments from the drivers involved.

However, as the season resumes, Alexander Albon has taken time out to reveal some of the background to the move.

"There is obviously a lot of excitement," he admits, ahead of his debut for the 'big team' in Belgium this weekend, "but I'd be lying if I said there wasn't a bit of nerves in there as well.

"I got called up to Dr Marko's office in Austria," he reveals. "I thought we were going to be talking about next year and future plans, but after about thirty minutes, he told me the plan and I would be lying if I said it wasn't a bit of a shock."

On hearing the news, the Thai youngster was contacted by his new team boss, Christian Horner.

"He congratulated me and we talked about how everything would work. Then he told me to turn off my phone and ignore the external noise, which was good advice. I then spoke to my mum to tell her the news. She is very optimistic and always expects things like this to happen.

"I was planning on taking it quite easy during the break," he continues. "I was going to go to Italy with friends and family, it was meant to be relaxing, but with the call up, I cancelled that, and spent the first week at home digesting what had just happened. I then went to Portugal with some friends that are also drivers for a training camp. It's weird because we spend so much time driving, the fitness level drops away slightly during the season so it was good to build it back up."

Reflecting on an impressive debut season thus far, he says: "Two moments stand out, the first was in China. I think it was my third race and I had a big crash in FP3, missed out on qualifying so had to start from the pit lane and I finished P10, which was a really good comeback... I was happy with that.

"The second was in Hockenheim, as a team we had one car on the podium and I finished sixth. I was running third and fourth in the race. It was my first time in the wet and it was really exciting. It was quite cool, I was fighting with Lewis, I wasn't meaning to, but we ended up fighting and it was good experience.

"When you come to the factory there's an atmosphere," he says of Red Bull's HQ in Milton Keynes, "you can't ignore it.

"It's a chance to prove myself and be part of this team," he adds. "Just thinking about it makes me laugh. Twelve months ago I was fighting for a seat in F1 and in December I got the call from Toro Rosso and now I'm here, it's nuts!

"My approach hasn't changed, I'm still finding my feet in F1, I'm not starting from the beginning, but I've got to find out what the car is like to drive, how the team works and learn everything. There are parts I can bring with me from Toro Rosso, but there are other parts that will be new."

"Max brings a lot to the table. Everybody knows how quick he is, but he works hard to get there. It will be interesting to hear his feedback to the team, how he communicates to the guys. That will help me learn how the team works. Especially in Spa, there will be a lot of listening and observing.

"I'm focused and am ready to be as strong as possible for the second half of the year," he continues. "I'm new to F1 and I know that better than anyone, so it's about being as prepared as possible!

"It's a step-by-step process," he adds. "It will just be FP1, FP2, FP3, and qualifying and it's going to be like that for the rest of the year. It's not going to come straight away... but I do want results."