Marko: We had to react 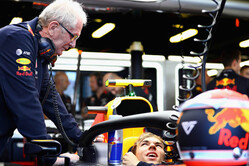 Before the Daniil Kvyat saga, there was Christian Klien, who was dropped just three races from the end of 2006 in his second season with Red Bull.

Just a year earlier, the Austrian has 'shared' the second seat alongside David Coulthard with Antonio Liuzzi, before being given the drive full-time - or at least until China 2006 when he was dumped in favour of test driver, Robert Doornbos.

Did we mention Daniil Kvyat?

On Monday, Pierre Gasly joined that long line of drivers for whom patience had run out, the Frenchman dropped in favour of rookie Alexander Albon.

Other than the briefest of press releases Red Bull has said nothing, while Toro Rosso hasn't even issued a press release.

However, talking to Auto Bild, Red Bull's lord high executioner, Helmut Marko revealed why time had finally run out for the Frenchman.

"Gasly has problems in traffic, he loses places and he can't overtake," said the Austrian. "So we had to react and give Albon a chance until the end of the season.

"Gasly takes his place at Toro Rosso and then we see who will be driving next year next to Max," he added.

While Albon has impressed from the outset, there is widespread belief that the move up to Red Bull comes too early in his career, a situation not helped by the fact that his benchmark is arguably the best driver on the grid at present and the fact that his team is not known for its patience and understanding.

Marko also admits that Red Bull "underestimated" the progress Honda would make this season, its first full season in partnership with the Austrian team.

"We built a car with too little downforce," he said. "We underestimated the progression of our new engine partner.

"They delivered more power than we thought," he admitted. "That's why we first wanted to compensate for the missing power with a chassis that is very aerodynamically efficient, but we corrected that.

"In the last races, we were almost equal to Mercedes. We definitely caught up with Ferrari. I think we'll be competitive on any kind of track in the second half of the season."