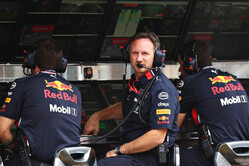 While the last three races have revived what was becoming a flagging season, the fact remains that when everything has settled down Lewis Hamilton and Mercedes are going to be cruising towards their sixth titles.

As a result, mush of the media is looking elsewhere for its stories, and while Kevin Magnussen insists that it's a case of 'nothing to see here' in terms of his relationship with his Haas teammate, the other topic sure to get the fans clicking is speculation over who goes where in 2020 and beyond.

While it has been revealed that Max Verstappen has a performance clause in his contract that would allow him to leave Red Bull should it not reach the level of competitiveness he seeks, the wins in Austria and Germany appeared to put that particular story to bed. Nonetheless, some sections of the media continue to ponder a possible move to Mercedes for the Dutch racer.

Asked if Mercedes has approached the youngster, and how he would feel about Verstappen and Hamilton in the same team, Christian Horner took the opportunity to tease the media.

"Toto has certainly not spoken to me about it," said the Briton. "He speaks to almost every driver on the grid, so I would think if he has had a conversation it's been direct not through the team.

"The situation with Max is clear and as with other drivers there are always trigger points," he added. "But in terms of having those two in one team, I haven't heard from Lewis either that he wants to join next year.

"You can see positives and negative in that," he admitted. "I think that ideally we want to see teams going head to head and the drivers are obviously very much part of that team. It would be great to see Ferrari with their drivers, Red Bull with our drivers and Mercedes with their drivers all fighting it out, and whoever else can get up there as well. It doesn't necessarily mean that two drivers have to be in the same team."

"Max wants to win so he is satisfied and happy when he's winning," he told Sky Sports Italia. "He sees the progress what we are doing and, as it looks, he has to stay with us anyway."