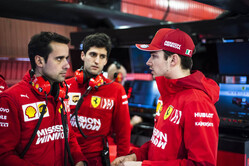 No sooner had the Hockenheim race stewards announced that Ferrari was to be fined for the unsafe release of Charles Leclerc during last weekend's German Grand Prix, than fans began taking to social media in outrage.

While Max Verstappen has been handed a time penalty in Monaco which compromised his race, fans were angered that Leclerc and Ferrari escaped with a fine.

"In Monaco, for clarification, it was labelled an unsafe release but it was actually for causing a collision in the pit lane," explained race director, Michael Masi, when asked about the incident. "So that's why that was different to Germany, which was clearly an unsafe release.

"Part of the discussion we had with team managers the other day, knowing the conditions could be changeable, and also taking into account everyone coming into the pit lane to do tyres at the same time is going to be a factor, it is still quite clearly consistent with the previous penalties," he added. "The fact that every other team thereafter was out didn't, even though the fast lane is as wide as it is, didn't allow what we saw at Silverstone with the car driving on the painted area."

However, other than what many still saw an an inconsistent application of the rules, there were fears that the bigger teams would continue the practice of releasing their drivers 'unsafely' and taking the fine merely to ensure an advantage during pit stops.

As a result, under pressure from team bosses following Thursday's meeting of the team managers, the FIA has now agreed to impose time penalties for the offence.

"It's completely wrong," said Verstappen after last week's race. "If you get a fine, everybody will do it.

"I think it's not fair," he added. "To say they gave me the penalty purely because we touched, I think that is also not fair, you're still releasing the car knowing there is a car in the fast lane.

"How big was the fine? 5,000? That's peanuts for a team. They really don't care to pay that. I think it's completely wrong to do that, especially if you talk about safety, it's not correct.

"I think they have spoken in the managers meeting about it. Let's see what they are going to do about it now."