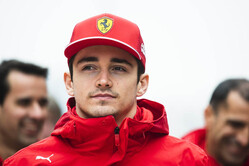 Though he eventually came to grief at the infamous final complex of corners, many fans were mystified, to put it mildly, when Charles Leclerc wasn't punished for the unsafe release which saw him almost T-bone Romain Grosjean during Sunday's hectic German Grand Prix.

Indeed, as some revived the Ferrari International Assistance (FIA) chestnut, many pointed to Monaco where Max Verstappen was released into the path of Valtteri Bottas, causing the pair to clash which earned a 5s time penalty for the Dutch driver for his release, and while Ferrari was fined five thousand euro in Germany, there was no time penalty for Leclerc.

"In Monaco, for clarification, it was labelled an unsafe release but it was actually for causing a collision in the pit lane," said race director, Michael Masi, when asked about the incident. "So that's why that was different to Germany, which was clearly an unsafe release.

"Part of the discussion we had with team managers the other day, knowing the conditions could be changeable, and also taking into account everyone coming into the pit lane to do tyres at the same time is going to be a factor, it is still quite clearly consistent with the previous penalties," he added. "The fact that every other team thereafter was out didn't, even though the fast lane is as wide as it is, didn't allow what we saw at Silverstone with the car driving on the painted area."

The Australian poo-pooed the idea that the fine could set a precedent, with teams opting to pay the money in order to get their drivers ahead during the stops.

"I don't think so," he said. "I think it's one of those... I think you've got to take each… I'm very much a firm believer, and the teams all agree, that you treat each case on its own merits."

"As much as you can try and group things, generally, you have to treat each and every circumstance that comes up, and judge it, so yeah I think in the end that's pretty straightforward."