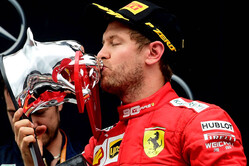 Sunday's German Grand Prix, Scuderia Ferrari partially made up for the disappointment of a difficult qualifying on Saturday, as Sebastian Vettel managed to go from 20th and last place on the grid to second at the flag. He finished just over 7 seconds down on the winner, Max Verstappen. However, Charles Leclerc's day was bitterly disappointing as he ended up beached in the gravel having hit the barrier at Turn 16 on lap 28, while lying second.

From tenth, Charles got off the line well as did Sebastian. At the end of the opening lap, the Monegasque was already sixth, having passed Grosjean, Gasly, Sainz and Perez. Sebastian was also moving up, going from 20th to 14th, eventually moving up to 12th as he disposed of Ricciardo. It was soon time to pit to go from full wets to intermediate tyres, making the most of the Safety Car that came out after Perez crashed. At the restart, Charles got past Hulkenberg and then Magnussen, to take fourth place, while Sebastian went from tenth to seventh.

The race stabilised for a while until it was time to switch from wet to dry tyres. On lap 23, Vettel came in for Softs, as did Leclerc four laps later. Then the rain returned unexpectedly to the Hockenheimring, more heavily than before and at the last corner on the following lap, Charles lost control of his car and ended up in the barriers. Before that, thanks to a perfect strategy from the team, he had moved up to second. His race was over, his SF90 stuck fast in the gravel trap. The team immediately called Seb in to again fit intermediates and he rejoined in eighth place.

On lap 41, the Safety Car came out again, when Hulkenberg went into the barriers at turn 16. Sebastian dashed for the pits to fit new intermediates in order to be able to lap faster than those around him. On lap 47, he made his final stop for Soft tyres as a dry line had by now appeared on the track. At this point he was ninth.

On slicks, Sebastian was able to make the most of the SF90, and started carving his way through the field. The German passed Gasly, then Magnussen and dealing with Albon on lap 56 when the race was neutralised one last time after Bottas crashed. The final restart came on lap 60 as Sebastian dealt with Sainz and set off in pursuit of Stroll. He passed the Canadian for third with three laps to go and on the penultimate lap he even managed to get by Kvyat's Toro Rosso to take the chequered flag in second place. It was an amazing comeback, with Seb giving it his all, helped by the team's strategy and the the SF90 which has certainly made significant progress over the past few races.

This is Scuderia Ferrari's tenth podium finish of the season, the fifth for Vettel, who was also runner-up in Monaco and Canada and third in China and Azerbaijan. The next round takes place in Hungary next weekend.

Sebastian Vettel: "That was quite a race. I enjoyed it even though it was a tricky race, something of a lottery. It was a very long one and I don't even remember all of it. It was very tough at times, especially on the intermediates in the slippery conditions. I made up a lot of ground immediately after the start and in the first couple of laps, even though it was difficult to see. After that, it was quite hard to get into a rhythm as I did not feel so comfortable on the intermediates and their degradation was quite high. It was hard to tell if the lack of grip was because of the track being greasy or because the tyres were going off.

"To be honest in these kind of races you can't count on anything until the last couple of laps. I think I was about P8 when the last safety car came out. There are so many decisions to make, but overall we stayed on track and in the race. In mixed conditions when it was starting to dry on the slicks I felt comfortable and that's when we made up the most ground."

Charles Leclerc: "It is a disappointing end to the weekend for me. After a good start, we worked our way forward in rather tricky conditions. The team did a great job and let me arrive in second place to fight for the win. The strategy was the right one and the car felt good.

"Unfortunately, I made a mistake in turn 16 and lost control of the car. I hit the wall and that was the end of my race. It's a shame and I am sorry for the team and our fans. Seb did a great job today and his result is well-deserved.

"Our car and performance were strong all weekend, in both wet and dry conditions, which is a positive. We have to stay focused and we will give our best again at the next race in Hungary."

Mattia Binotto Team Principal: What a race! The car worked well all weekend, in all conditions. Today it proved to be quick, even in the final part of the race in the dry on a much cooler track than we had to deal with in the extreme heat on Friday. That is definitely an important consideration, as was the fact it also went well in the wet.

"We are very happy for Seb as this fantastic second place is a great confidence boost. He has been in great form all weekend and today he produced a brilliant drive, coming through from the back of the field.

"As for Charles, he's aware today was an opportunity missed, but he will get over it. There are plenty more races and there is no doubt that the guy is very quick and today he was delivering an extraordinary performance.

"It's true that maybe we could have come away with more today, but that's racing. Thanks go to all the crew in the garage who worked so hard to get the cars fixed this morning so they were ready to race. We've had some difficult moments, but it's at times like these that you see what the team is made of and that's the important thing."