"It was fantastic," says Mick Schumacher of F2004 outing 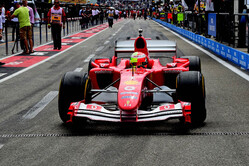 Possibly a portent of what was to come in qualifying, when bringing Michael Schumacher's title winning F2004 to Hockenheim in order that the seven-time champion's son could drive the car in front of the German's adoring home fans, the Maranello outfit opted to bring a spare.

Following an emotional outing, which he will repeat ahead of today's driver parade, Mick Schumacher admitted that waiting to go out on track in the car was "torture".

"I just wanted to go out and I just wanted to drive," he told reporters. "Obviously having to wait, even in front of the pit exit, was more like torture. The minutes seemed like hours. But once I was on the circuit, the minutes went by like seconds.

"I remember watching my father on television," said the youngster, who wore a special helmet with a livery that was half his own and half featuring the dominant red colour favoured by his father from the 2000 season, "winning many races at the wheel of this iconic car and I was impressed by the power and noise of the V10 engine. 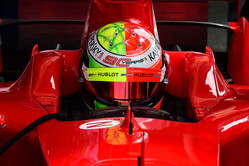 "I could see the fans cheering in the grandstands, but I couldn't hear them because their sound was drowned out by the roar of the car.

"There wasn't a single moment today when I didn't have a huge smile on my face. If it had been up to me, I wouldn't have ever come back to the pits."

"I want to thank Ferrari and Formula 1 for having given me this opportunity, which was a dream and an honour for me."