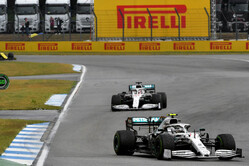 While the record books will show Mercedes leaving Hockenheim with a couple of points, world champion Lewis Hamilton having extended his lead in the process, the German teams knows that other than a truly awful performance that appeared to include the entire team, those points came courtesy of the penalties handed out to the Alfa Romeo duo, penalties the Italian (OK, Swiss) team is appealing.

"We had a painful Sunday in Hockenheim," admits Toto Wolff. "We made mistakes, took the wrong decisions and left Germany with only two points.

"But we love Formula One for the challenges it throws at us," he continued, "as they present an opportunity to improve.

"I believe that one of the core strengths of our team is the way we handle defeat. We accept responsibility for mistakes so that we can learn and improve - and we will come back stronger from this. The positive is that the next race is only a few days away and that we have the chance to redeem ourselves in Budapest this weekend.

"In recent years, the Hungaroring has been a challenging circuit for us," he admits, wary, no doubt, of the cooling issues that are clearly still affecting the team and are likely to compromise performance this weekend, "but we managed to win there last year and there are a number of reasons to believe our car could be more competitive there this year than in recent seasons.

"Looking at our competition, Ferrari have been very strong on short circuits this year and we expect them to be competitive again in Budapest; Red Bull, too, have won two of the past three races with Max.

"But we haven't lost sight of the fact that we have come out on top in nine of the 11 races so far this year. And we are determined to fight tooth and nail this weekend to achieve another strong result."